Nine scintillating works of seduction and self-delusion by the diminutive master of the art of musical overkill.
Lil' Beethoven. Entertainment in extremis.
It's in the genes. 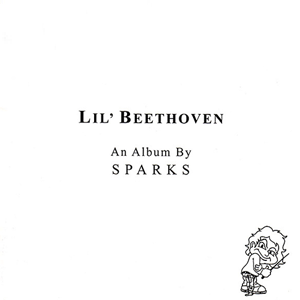 I am the rhythm thief. Auf wiedersehen to the beat.

The album was widely seen as both a return to form and a radical change of direction for the Mael brothers, who after two decades of delivering witty yet mostly underwhelming Synth-Pop, had dropped the style in favour of a fresh sound dominated by piano, multi-tracked vocals in place of dance beats (hence the cries of "oh no, where did the groove go?" in the opening track), and - living up to the title's classical pretensions - layers upon layers of orchestration created using synthesizers.

The songwriting too was more experimental than prior Sparks whilst retaining their tongue-in-cheek nature, and has often been compared to Radiohead's Kid A for its heavy use of repetition and unorthodox arrangements. Many tracks on the album are satirical, with the Maels slyly addressing then-current trends in music as well as the state of modern-day culture in general, rendering the dramatic production style all the more ironic. However, whilst largely devoid of traditional rock instruments, it does contain guest appearances from drummer Tammy Glover and Faith No More touring guitarist Dean Menta, who joined the brothers on the road to play Lil' Beethoven in its entirety.

To promote the album, the duo devised a backstory for the press explaining the record's concept. It told the story of how the titular character - a Reclusive Artist and the present day descendant of composer Ludwig van Beethoven - had been approached by the brothers to work on new material with them, the nine songs bearing the fruits of this supposed collaboration.

Lil' Beethoven is often considered by many to be one of Sparks' best records, which some claiming it surpasses even Kimono My House in terms of quality. Though it wasn't a hit commercially, it was the album that finally gave them equal exposure in both Europe and the United States, reviving their critical reputation as a vital, inventive force in pop music.