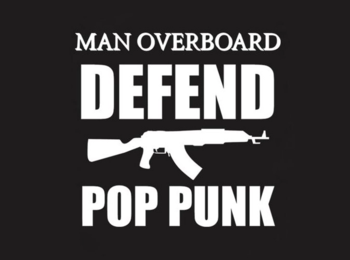 The joke T-shirt that started a movement.
Advertisement:

A scene of Alternative Rock music that arose in the early 2010s that combines pop punk with elements of melodic hardcore and Emo's dark but poppy aggression.

Named after Man Overboard's (one of the key bands of the movement) joke motto to defend pop punk from all of its detractors and critics (starting from The Effort's joke slogan, "Destroy Pop Punk"). By 2010, the mainstream Pop Punk and Emo Music that had once reigned over the airwaves had become the butt of jokes. Bands in the movement sought to restore the punk credit and emotional core to Pop Punk to make it worth defending.

Though it never reached mainstream status, the movement was nonetheless influential in the Punk and Alternative Rock scenes, with several associated acts performing at the final Warped Tour shows.

Bands in this genre: