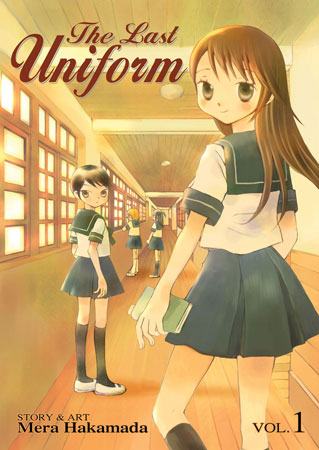 The Last Uniform (Japanese title: Saigo no Seifuku) is a Seinen yuri manga by Mera Hakamada. It ran in Manga Time Kirara Carat from 2004 to 2006. The first two volumes have been translated and published into English by Seven Seas Entertainment as part of their Strawberry line.

The story takes place at Tsubakigaoka Academy, an all girls' boarding school where often two or three roommates share a dorm room together. The story principally covers two sets of roommates and two yuri couples in particular, Ai/Fuuko and Tsumugi/Beniko.

Ai is roomed with Fuuko who drives her crazy, especially since Fuuko often accidentally gets into trouble and students share punishment for anything a roommate does. However, there's an undercurrent that Ai cares much more about Fuuko than she lets on.

Tsumugi is a tomboy who shares a room with the popular Beniko. Tsumugi secretly harbours feelings for Beniko, feelings that Beniko seems unaware of.

The story examines how each of the two couples relates to each other as well as their school life.

Has absolutely nothing to do with a certain fantasy novel and beloved animated film, and the cast does not include a man named Shmendrik.