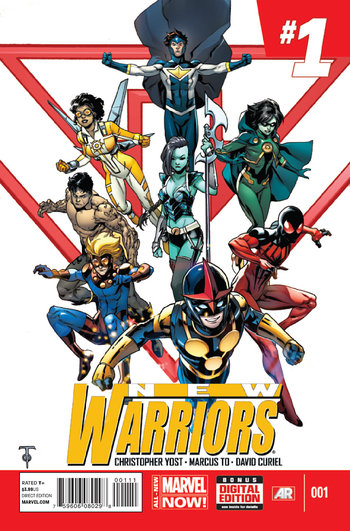 A Marvel NOW! relaunch of New Warriors series is written by Christopher Yost and drawn by Marcus To.

Having taken the road again after renouncing their teacher jobs at Avengers Academy, Speedball and Justice find themselves in the town of New Salem, Colorado, where they get into a little fight with the Salem's Seven, but quickly patch things up after it is clear it was nothing more than a misunderstanding; their leader, Vertigo, explains later to Justice that the place is a haven for all people "born of magic" with Salem's Seven acting as the town's resident protectors. While the conversation deviates to Justice's and Speedball's intention of reforming the New Warriors and the difficulties that that will probably bring due the team's persisting bad reputation for their involvement in the Civil War events, they notice the teleportation arrival into the town of a trio of enigmatic figures clad in advanced armor. One of these beings declares that "the blood here is tainted" and all must be burned down.