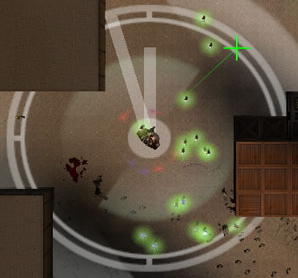 Bullet Time? Now shit just got real!
Try to imagine Counter-Strike 2D, only with a touch of 3D and massive amounts of Awesome Sounding Stuff.

is a freeware multiplayer top-view shooter, in which you play a soldier whose inconvenient mutations gives him the power of acquiring inhuman abilities, including the aforementioned bullet time, Invisibility, and two or three varieties of Healing, split between three different skill trees.

The game offers Team play as Scientists or Rebels, or Free-for-all as Mercenaries on battle maps.

The game is currently undergoing constant updates and changes.