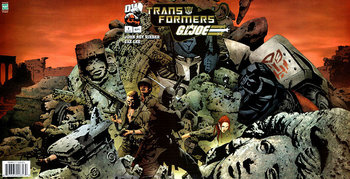 Transformers/G.I. Joe refers to a comic book crossover between Transformers and G.I. Joe by Dreamwave.

The six-issue miniseries took place in 1939 and had G.I. Joe teaming up with the Autobots to take down Cobra and the Decepticons.

Another miniseries taking place decades later and titled Transfomers/G.I. Joe: Divided Front was planned, but got cancelled after only one issue was published due to Dreamwave's bankruptcy.