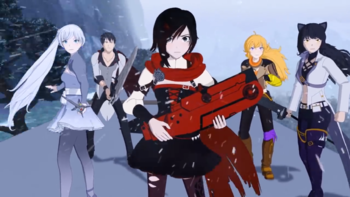 "What's the plan, Ruby?"
Written by Miles Luna & Kerry Shawcross
Directed by Kerry Shawcross & Connor Pickens
Nora: Aaaand you are?
Dee: Why, Dee and Dudley, of course. The Argus Limited's very own Huntsmen. We'll be keeping everyone safe as we pass through Grimm territory.

With the Relic of Knowledge secured, our heroes must travel to the icy realm of Atlas for the next step in their adventure...

"Still alive! That sure was a close one, huh?"