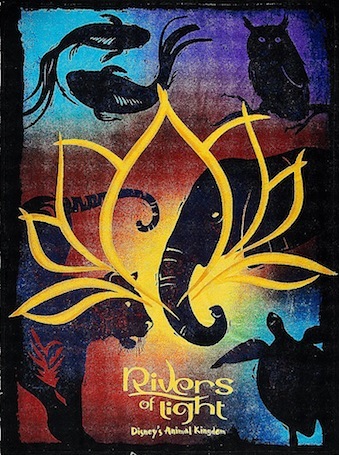 "We are one"
Of all the gleaming planets in our vast universe, it is only here on Earth that water and light harmoniously unite to create the wonder of life. We most graciously welcome you to a timeless celebration of water and light with roots as far reaching as time itself. Here, where the forces of nature meet in harmony, the spirits of the animals are free to dance together in the night sky creating Rivers of Light. We are united in this special place to celebrate the magnificence and wonder of all living creatures, for in life we are all one.
Opening narration
Advertisement:

Rivers of Light was a nighttime lagoon show at Disney's Animal Kingdom in Walt Disney World. Taking the fountain and water screen technology of previous shows like Fantasmic and World of Color and making them mobile, the show took the form of an Asian lantern festival pageant on the waters between the Asia area and DinoLand U.S.A. featuring music by Mark Mancina (The Lion King, Brother Bear, Moana) and animal footage shot by the Disneynature documentary unit. Initially scheduled for an April 2016 opening, technical problems lead to a long delay. It eventually debuted in February 2017.

The lantern ceremony was presided over by two shamans with Elemental Powers, Aseema (Water) and Aditya (Light/Fire) and their respective apprentices Ambu and Ketu, representative of the natural/cosmic forces that make life possible. Using pantomime, shadow puppets and magic, the shamans called on the power of four totemic Animal Spirits: A Tiger, a Turtle, an Owl, and an Elephant and five mystical Lotuses that took us on a journey through the natural world, the Aurora Borealis (the titular Rivers of Light), and eventually into the heavens and the animal constellations within.

Executive Meddling would result in the live actors being cut from the show in the fall of 2018 and the show to be retooled to feature more familiar Disney animated characters in May of 2019, with the altered show gaining the subtitle We Are One.

On July 16, 2020, the company sent its staff a memo that the show, along with Primeval Whirl at the nearby DinoLand U.S.A. area and Stitch's Great Escape! at the Magic Kingdom, were permanently closed; Disney confirmed to Attractions Magazine