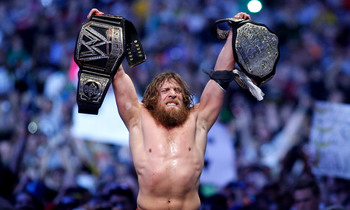 The hero of the Reality Era, in spite of what the company wanted.
Advertisement:

WWE (now just "WWE", having abandoned the name it was an acronym of, "World Wrestling Entertainment", in 2011) had soldiered on through the PG era with relatively little problems going into the beginning of the 2010's, and had a number of promising young stars that could fill the void left behind by The Rock and "Stone Cold" Steve Austin with John Cena, Batista, Triple H, Edge, Randy Orton, and a host of younger talent like CM Punk, Kofi Kingston, The Miz, Dolph Ziggler, and the members of a dangerous new faction called The Shield.

Then... the roof caved in in a shocking moment for everybody: CM Punk straight up quit wrestling over disagreements he had with booking and a misdiagnosed staph infection after the 2014 Royal Rumble. Thankfully, the WWE had a bunch of talent that could take the reigns and make WrestleMania season as fun as it always had been, even if a prevailing wisdom was that the events were starting to become a bit stale.

And then some B+ Player's fans just happened to throw a wrench into the plans of everything. For the better, anyway.

The rise of Daniel Bryan as a beloved WWE wrestler can be best described on his own page, but it is important to note that the catalyst for the emergence of the era's biggest hero was the widely-panned decision to job him out to Sheamus in an 18-second squash match at WrestleMania XXVII, and that his push could've very easily have been quashed right then and there were it not for a last-minute booking decision that saw him leave The Wyatt Family and prove to Vince McMahon and company (which now included Triple H as the COO) that things needed an immediate change after weeks of the fans going near-riotous for more D-Bry. This was the first time that the company publicly admitted that not only was the internet wrestling community a thing, but also an important part of how fans consumed the product, especially now that they could get all their wrestling online with the launch of the subscription-based WWE Network, which coincided with the change in logo to something much cleaner. The era began in earnest at WrestleMania XXX, where Daniel Bryan became WWE World Heavyweight Champion, The Undertaker's streak was broken in a shock loss to Brock Lesnar the likes of which is still remembered to this day, and The Shield finally broke away from their corporate masters, The Authority... and also broke into the three distinct but separate careers of The Shield's three members.

This era could best be described as one of transition for the company; many mainstays of the Attitude Era and even Ruthless Aggression Era were beginning to retire from in-ring action, leaving the company, dead, getting into acting, or too old and overexposed to continue drawing for the company save for guest appearances. They chose largely to use the one-two combo of a now-fully rebuilt Brock Lesnar and Roman Reigns, with... mixed results. Both suffered from bouts of audience apathy, bad writing, and transparently hamfisted booking, but Reigns got such a visceral reaction and the lion's share of criticism that he, to this day, has trouble shaking it off years later. Making this worse was that the wrestler that arguably started all this, Daniel Bryan, had been forced into retirement thanks to injuries suffered in the ring. And the Authority continued to torment the audience and screw over the roster while receiving no punishment whatsoever, leading to X-Pac Heat the likes of which had never been seen before— even the faction’s removal after Wrestlemania 32 wasn’t booked correctly.

But it wasn't all doom and gloom during this uncertain time. Many fan-favorite gimmicks and stables, such as The New Day, Damien Sandow, and the goofballs over in 3MB made sure that even if fans didn't like what the main event was looking like, the undercard still had plenty to offer. WWE NXT would also begin hitting its stride as a brand of its own on the WWE Network, doing its first major events, arRIVAL and TakeOver, and began making its first true stars in players like Adrian Neville, Sami Zayn, Finn Bálor, and its most impressive feature at the time: the women's division.

The "Women's Revolution" has its roots in this era, as Paige was not only massively over in FCW/NXT for her explicitly "Anti-Diva" looks and wrestling style, but also for her vicious charisma, which saw her promoted to the main roster and made Divas Champion in 2014 on her first night in the main roster. As a result, the NXT Women's Championship was vacated, and the beginnings of the Four Horsewomen (Charlotte Flair, Sasha Banks, Bayley, and eventually Becky Lynch) began to see more and more ring time, with matches so well booked and with rapid fan-interest they began to main event TakeOvers by 2016.

While the era definitely was far from perfect for the company, the seeds of great role players and future champions to come were planted, and the current era was kicked off in a Phenomenal way.