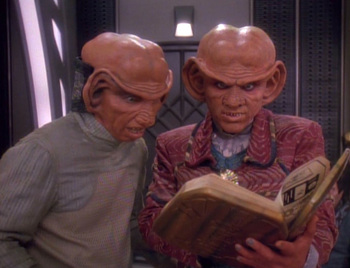 Meanwhile, the crew throw a surprise party for Bashir to announce that he's been nominated for a Carrington Award. Bashir is embarrassed and assures everyone that he won't win. Dax later confronts him on his negative attitude. He explains that the Carrington is effectively a lifetime achievement award, and he's far too young and unaccomplished to win.

Quark tires of his exile from his quarters and pushes Rom to confront the Nagus. But rather than be offended, Zek is in good spirits and happy to receive company. He welcomes both brothers inside and reveals that he has been working on his magnum opus, an updated version of the Rules of Acquisition. The brothers are overjoyed at the opportunity to be the first to receive the Nagus's wisdom and profit from it. But their excitement turns to horror when they see that the Nagus has rewritten all of the Rules to support charity, empathy, and family values rather than greed, ambition, and ruthlessness. With no other rational explanation, Quark decides that the Nagus must have gone insane.

Quark takes the Nagus to Bashir, who can't find anything wrong with him. In fact, the Nagus has quit all of his vices, so he's in better shape than ever. Zek announces that he's going to set up a charitable foundation to give away his riches, including a special gift for the Bajorans. He installs the brothers as his right-hand men in the endeavor. Rom throws himself into the role, but Quark realizes that if the Nagus were to reveal his new Rules of Acquisition on the Ferengi homeworld, the irate citizens would kill them all. To save their skins, the brothers must take desperate action to determine what's wrong with the Nagus.

Meanwhile, Odo meets with Bashir to tell him that he's received intelligence that the front-runner for the Carrington won't get the award, meaning it's up for grabs. Bashir reiterates that he does not expect to win, but Odo deduces that he's in the middle of writing an acceptance speech. Maybe the doctor is a little more invested than he lets on.

The Ferengi boys try to break into the Nagus's ship, only to get caught by Maihar'du. But instead of wring their necks, he lets them inside. It seems the silent manservant is just as concerned as them about the Nagus's behavior. He shows them the gift that Zek is planned to give the Bajorans: an Orb of Wisdom. Quark accidentally gazes into the Orb and has a vision of Zek taunting him. Afterwards, he and Rom figure out through the Nagus's logs that he went into the wormhole to gain insight into the future from the prophets, who instead made him charitable. The trio kidnap Zek and take him into the wormhole to convince the prophets to change him back.

Inside the wormhole, Quark receives an audience with the prophets, who speak to him in the guise of people he knows. They admit to changing the Nagus after finding his Ferengi outlook to be aggressive and obnoxious. They threaten to do the same thing to Quark. The barkeep gives a passionate defense of Ferengi values, arguing that greed is good, and without ambition, nothing would ever get done. The prophets are unimpressed and would rather just be left alone. Quark points out that continuing to change Ferengi will only increase curiosity in the wormhole and bring more people looking to find out what's going on. The prophets relent.

A big group of supporters all gather to watch the Carrington Award presentation. It goes to one of the dark horse candidates, and everyone groans in sympathy for Bashir. In private, Bashir admits that even though he really didn't think he was going to win, he still can't help but be disappointed.

The Nagus is back to his old grouchy, greedy self. He tells Quark to make sure that every copy of his updated Rules of Acquisition is destroyed. Reflecting on recent events, Quark laments that he's once again come out empty handed. Rom, however, reveals that he made quite a windfall by shamelessly embezzling from Zek's charity. An impressed Quark tells him that their father would be proud.