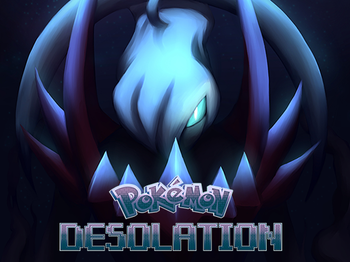 Pokémon Desolation is an episodically released Pokémon fangame, inspired by both Pokémon Reborn and Pokémon Rejuvenation. Like the former two games, Desolation is not a ROM Hack, but rather an RPG Maker game.

You and your two friends, Ava and Scarlett are on a trip to the Ayrith Region, a large land mass split into several islands. With a freshly made trainer license, you are preparing to challenge the local Pokémon League and hopefully have an unforgettable and fun time with your friends. Unfortunately, a gang war between two mysterious groups erupts and you are separated from your friends and thrown into an island with an unfriendly passenger named Connor who does not hide his contempt for you at all but is willing to work with you. Scrounging up a stray Poké Ball from the wreckage of the boat and on the run from the unfriendly natives who worship a man named Kuiki, you and Connor seek to find your friends and survive. Unfortunately, things get even more complicated as you are entangled with the machinations of both a man calling himself Shiv, who seems to know you somehow, and the idealistic utopian dreams of a woman called Nova. Both hold strange powers that defy reality, and both vie your support. How will you make your way in this island of mystery and deception? Things may not be all they seem...

Similar to its two inspirations, Pokémon Desolation is designed to challenge the player in a more difficult journey in its region, especially at the start, and tells a story that's darker and more violent, with a focus on deception and delusions as its primary themes. While the game borrows from Reborn's field effect system, it has 13 gyms in comparison to Reborn's 18. Also unlike the former two, you get an entirely different selection of starters at the start due to circumstances, with the more traditional starters available later.