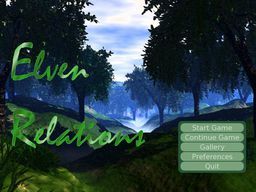 Elven Relations is a Ren'Py-based Fantasy Romance Visual Novel by Alex Churchill (under his pen name ChronoLuminaire), also the author of the NaNoRenO Visual Novel When I Rule The World.

In Elven Relations, you are Private Takuya, a solder of the Kingdom of Reachfar under the command of the highly experienced veteran, Lieutenant Yurika.

Hundreds of years ago, Reachfar and the nearby Elves suffered through a war. Ever since, the two peoples have coexisted in a tense sort of peace. The story begins with the King of Reachfar giving your squadnote consisting of you, Yurika, your childhood friend and accomplished, not to mention hair-trigger, fire mage Tokho, and your girl-obsessed Ranger friend Kei to escort a diplomat called Makoto to improve relations with the Elves.

En route, the squad does meet some resistance from Elves, but the player is still able to fulfill their mission before returning home... And then, of course, based on your decisions throughout, you figure out which of the girls your portrayal of Takuya will end up with.

You can get it for free at its webpage

A sequel called Mermaid Liaisons was in development for a while (and has a demo available), but currently appears to be Vapor Ware.