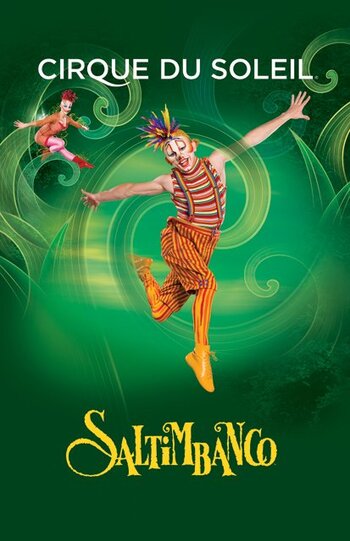 Cirque du Soleil's fifth production toured the world from 1992-2012. The plot is a celebration of urbanity; the title is Italian for the phrase "to jump on a bench" and can also refer to a street performer. The characters, who live in "the city", are divided into three groups — the Multicolored Worms that show up early on for the Chinese Poles act, representing primitive lifeforms; the Masked Worms, people forever clad in face-concealing white masks, afraid to show their individuality and serving as observers in Act One; and the Baroques, life-loving, good-natured rowdies who represent what the Urban Worms can evolve into and are the only characters seen in Act Two.
Advertisement:

This show was designed to sit on the far end of idealism, and thus one of the sunniest of Cirque's shows — drenched in bright primary colors and with a score that draws heavily on world music with the occasional rock-tinged number, as in the Russian swing act that opens Act Two.

Because this show and Mystère (which opened at the end of 1993) significantly overlapped in their development stages and creative teams, and the company was much smaller then, several acrobatic disciplines appear in both shows — Chinese poles, hand to hand, and bungee trapeze. However, the two shows have significantly different moods and themes; Mystere can be seen as a moon to Saltimbanco's sun.

The show was filmed in 1994 and released on video. After years of touring under the big top, often as Cirque's first show to visit a particular country as the company's reach grew, in 2007 it was adapted for arenas in smaller cities and made another round-the-world circuit.