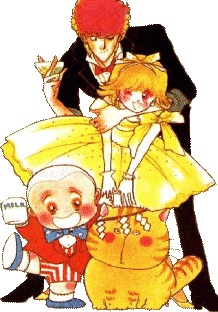 Ai Shite Night (愛してナイト, Aishite Naito, lit. "Love Night" or "Night for Loving") is a shōjo manga by Kaoru Tada (better known as the creator of Itazura Na Kiss) which was serialized in Bessatsu Margaret from 1982 to 1984. An anime version of the story in 42 episodes was also produced in 1983-84 by Toei Animation, and features episodes supervised by Shingo Araki, the deceased character designer who worked on many other Toei series, such as Cutey Honey, Majokko Meg-chan and Saint Seiya.The anime adaptation proved so successful in Italy that the Italia 1 channel produced a live action sequel named Love Me Licia, consisting of no less than four seasons (for a total of 145 episodes), between 1986 and 1988.

"Ai Shite Night" is set in Osaka, and tells the story of Yaeko "Yakko" Mitamura, an 18 year old Girl Next Door who divides her time in between her father Shige's Okonomiyaki restaurant and her evening college classes. One day Yakko casually meets a little boy, Hideki aka "Hashizo", and his odd cat Juliano. Hashizo lost both of his parents when he was still a baby and has been brought up by his elder brother Go Kato, who is the lead singer of the emerging rock band "Bee Hive". When Yakko meets Go and his friend and "Bee Hive" member Satomi Okawa, an unexpected series of events and a tangled romance unfolds.

Whereas the main narrative of Ai Shite Night is essentially based on a love story, interesting and innovative elements were introduced by Kaoru Tada, most notably the portrayal of the Japanese music scene in the early '80s. In creating characters such as Go, Satomi and their band "Bee Hive", Tada was inspired by successful bands of the time such as "The Stalin", "Novela", "Primadonna" and "44 Magnum". Tada also plays with sexual provocation and ambiguity, mainly embodied by the character of "Kiss Relish" vocalist Kazuma "Sheila" Kataoka, although these elements were considerably toned down in the anime version of the story.