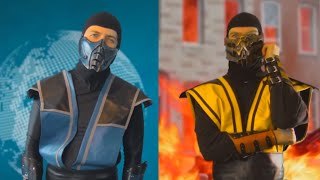 These guys still hate each other (Though not as much these days...)
Real Mortal Kombat is a web-video series created by Bizarrely Funny creators "Ryan Jossy" & "Anthony Lively". The link to their Youtube channel is here: BizarrelyFunny

. Otherwise known as "Mortal Kombat in Real Life", RMK mainly focuses on the two most memorable characters of the video game franchise (Sub-Zero & Scorpion). Originally starting on the 31st of March 2010, the series has grown from a one-shot video game parody to a full fledged web video series.