There are five major fabricators of goods and tech in Union, and those five also provide licenses to their mech patterns.

General Massive Systems (GMS) is the galactic-baseline for quality, and the bar isn't as low as that makes it sound. GMS is one of the oldest fabricators in the galaxy and have lasted that long for good reason. Everything that can be manufactured is from GMS, or uses their parts.

Everest
GMS's flagship mech, the Everest, isn't the fanciest nor the best, but being incredibly modular and reliable has allowed the Everest to become ubiquitious in the galaxy.

IPS-Northstar is the biggest name in interstellar shipping in Union, their history is inextricably tied to that of interstellar piracy, and their mech lineup reflects that. IPS-N offers a range of versatile and durable mechs with a focus on toughness and close-quarters combat.
Blackbeard
The Blackbeard is focused on close-ranged fighting, and especially grappling its foes and tearing them to shreds. 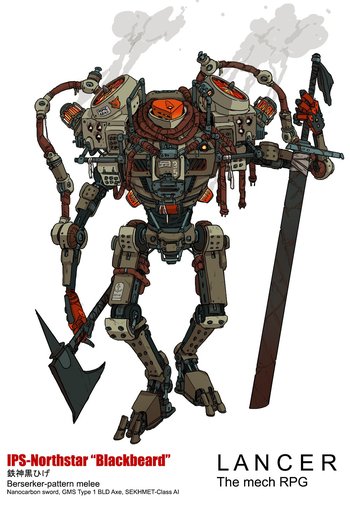 Drake
The Drake is a large, very heavily armored powerhouse designed to defend its allies while still providing considerable firepower. 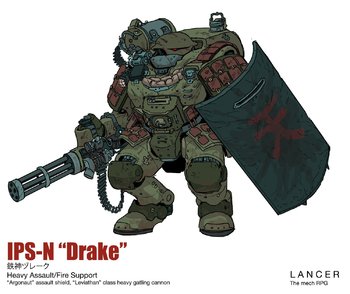 Raleigh
The Raleigh is a tough gun platform with a focus on powerful, reloading weapons. 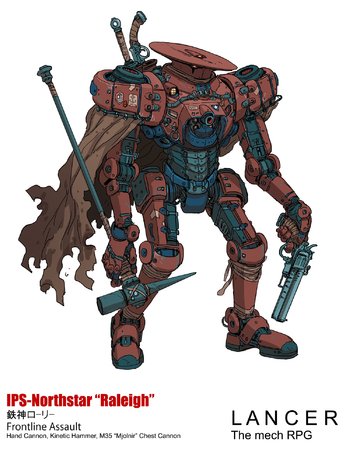 Elegant and stylish, SSC was an early leader in developing sublight and EVA vehicles before expanding and diversifying into other technologies. Mechas created by SSC emphasize maneuverability, speed and accuracy over firepower.
Black Witch

Horus isn't so much a company as it is a philosophical cult. Spreading in tandem with the Omninet and operating via black market printers, hacker communes and esoteric collectives, HORUS's mechs specialize in crowd control, unit management and electronic warfare.
Balor

Goblin
The Goblin is a small but deadly and feared hacking platform.

Manticore
The Manticore is an unstable system that heavily uses electromagnetics, with a distinct theme of divine punishment.

Minotaur
The Minotaur is a dimension-bending mech that excels at inflicting negative conditions upon enemies.

Once an arms and munitions manufacturer, the end of the Union's Second Committee has allowed HA to expand into a full-blown imperialist corpro-state which now fields its own line of heavy-duty combat mecha. HA mechs tend to be very durable and often field massive, state-of-the-art weaponry.
Barbarossa
An incredibly massive frame, the Barbarossa is more akin to a gigantic siege weapon around which a mech has been built. 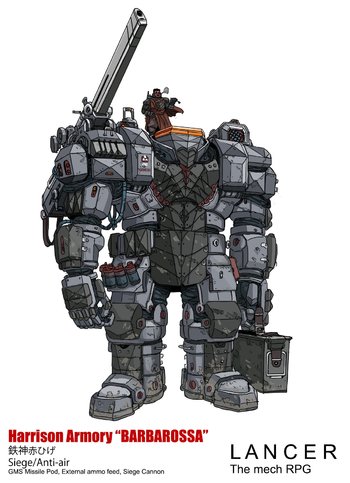 Genghis
The Genghis is a terrifying frame that uses flame-based warfare; notably, it was the first mech to be used in a military context, popularizing it for such purposes.

Iskander
The Iskander is a sophisticated mech that controls the battlefield via manipulation of gravity.