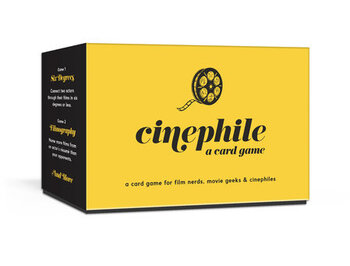 Cinephile: A Card Game is a card game released in 2019 and created by Cory Everett and illustrated by Steve Isaacs. Cinephile was created by and for cinephiles. The pack features 150 cards, each with original illustrations, a mix of both cult and classic films, movie stars and character actors from the New Hollywood era through today. Each card features an illustration of a famous or cult actor/actress along with their name below it, and a film they've been in.

What sets this card game apart from other cinema-themed games, is that the game was "for the people on the bus at Sundance, in line at the New York Film Festival, the lobby at BAM, on the lawn at Hollywood Forever Cemetery for Cinespia, “Or at the very least a game that would look great on the shelf next to your Criterion Collection.”

And indeed, this game definitely has quite a bit of unique factors to it. While, the majority of movie games are aimed at a wide audience, so they try to satisfy people who know a lot about movies and people who don’t know very much... this game is mainly for true cinephiles and film nerds, hence the name. The card game quickly proved to be a huge hit with various people. especially film experts.

With five different ways to play, sorted into three levels of difficulty: Movie Geek (Easy), Film Nerd (Intermediate), and Cinephile (Expert). The games include Filmography (name more films by one actor than your opponents), Head On (placing cards against your forehead, guess as many actors in a minute as you can), Movie-Actor (name a movie, next player names an actor from that movie, following player a different movie that actor has been in, and so on), Take Six (think Uno meets Six Degrees) and Six Degrees (connect two actors through their films in six degrees or less).

The duo also created 'lil Cinephile, a spin-off brand to inspire the next generation of cinephiles. Their first book, A Is For Auteur, an illustrated alphabet book featuring a selection of cinema’s greatest filmmakers from A to Z, is currently out.

Tropes featured in the game