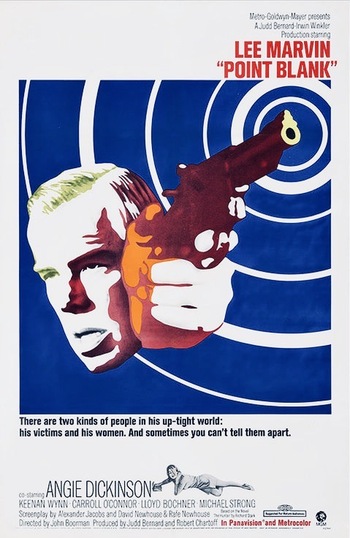 Walker (Marvin) is pulling a heist on Alcatraz Island with his partner Reese (John Vernon) when Reese betrays him, taking both the money ($93,000) and Walker's wife Lynne (Sharon Acker) and leaving him for dead. Walker survives the shooting and, with the help of the mysterious figure Yost (Keenan Wynn), begins to hunt down Reese, his wife and the money.

It turns out Reese needed the cash to pay off a debt to the mysterious Organization, a crime syndicate led by a trio of bosses. So not only does Walker have to deal with Reese, but also a large criminal enterprise with enough resources to take down one lonely man...

Based on the novel The Hunter by Donald Westlake (using the pseudonym "Richard Stark"), the first of a series in which the central character is named Parker, not Walker. Remade as Payback with Mel Gibson.