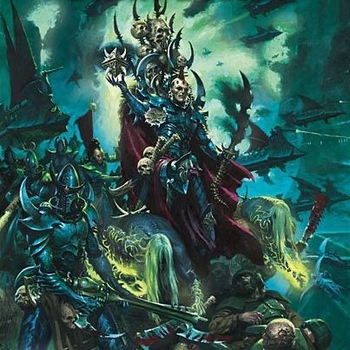 Pray they don't take you alive.
Pain is power, and power is everything. We therefore seek every opportunity to inflict pain, and we do not allow limits to be imposed upon our imagination. The flesh, the mind, the soul — all can be made to feel torments eternal. And when all three scream in agony within a single being, the path to immortality lies open before us. So it has been since the beginning, and so it will continue until we extinguish the stars and the galaxy lies dark and fallow.
—Mantra of the Kabal of the Dying Sun

In Warhammer 40,000, the Drukhari, commonly known as the Dark Eldar, are one of the galaxy's greatest menaces, shadowy pirates that strike without warning and subject their victims to uncounted horrors.

As the former Eldar empire's ever-increasing debauchery and hedonism descended into complete madness, many of the cults of excess that were taking over society moved their bases of operation into the inter-dimensional Webway to create private realms of depravity. This shielded them from the psychic backlash of Slaanesh's birth, allowing them to gleefully continue the lifestyle that led to the Fall and flourish in their twisted capital of Commorragh while their Craftworld cousins drifted in the void. Yet as more time passed, these Eldar discovered that they hadn't escaped Slaanesh's touch after all, as their souls were being slowly drained away. However, they discovered that if they caused others to suffer in their stead, they could stave off this soul-death for a while longer. Thus were born the Dark Eldar, a race of sadistic murderers who feed upon the agony of their victims.

The entirety of Dark Eldar "civilization" is focused on generating pain and suffering, leading them to undertake frequent raids to acquire captives for bloodsports, scientific experiments, or simple torture. They are pirates and raiders beyond compare, appearing out of nowhere, striking, and departing as swiftly as they came. The Dark Eldar revel in violence and bloodshed, savoring the terror and pain they create in their victims as it makes them "whole" once more. This bloodlust also extends to their own kind; their own pain will suffice when others are unavailable, and many aspects of their lives are brutally masochistic. However, despite the Dark Eldar's immense pride and power, they are slaves to their addiction who exchanged a quick death for something far worse, and the gnawing hunger in their souls forever reminds them that they are but inches from annihilation.

On the tabletop, the Dark Eldar army is best compared to a scalpel—precise and quite dangerous, but fragile. Their soldiers are frail and lightly-armored, and even their vehicles can be brought down by small-arms fire. To compensate, their army is highly mobile, featuring blindingly-fast open-topped skimmer transports to quickly get troops exactly where needed, or run circles around their opponent. Their ranged weapons make a mockery of both enemy armor and monstrous creatures alike, and while they lack the staying power of Orks or Space Marines in protracted combats, the Dark Eldar excel at swift, overwhelming assaults that annihilate the enemy before they can strike back. Even better, some Dark Eldar units grow more powerful as they slay foes, allowing them to seize an advantage to become all but unstoppable. They are easy to play badly, but if used well the Dark Eldar are devastating.

The Dark Eldar were introduced for the 3rd Edition of Warhammer 40,000 with their first models included in that edition’s starter set. In January 2017 the Dark Eldar were the focus of Gaiden Game Gangs of Commorragh where gangs of Hellions and Reavers fight aerial battles for territory with White Dwarf later releasing additional rules for Harlequin gangs. The 8th Edition of the game saw the Dark Eldar officially renamed the Drukhari and their rules can be found in Codex: Drukhari released in April 2018 with additional rules released in the October 2019 supplement Psychic Awakening: Phoenix Rising.

open/close all folders
Notable Drukhari tropes
Denizens of the Dark City
Power changes hands often in Commorragh, but a few special individuals have managed to cling to it: 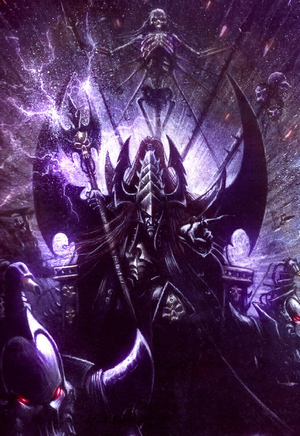 Death is my meat; terror my wine.

Archon of the Black Heart Kabal, the first and largest Kabal in the Dark City, and by extension the de facto ruler of Commorragh, Asdrubael Vect is a brilliant and ruthless leader who has held the Drukhari in his iron grip for millennia. Vect claims that it was he who discovered the method of staving off Slaanesh's sapping of the souls of the Drukhari by feeding off the pain of others, while his detractors claim he is nothing but an upstart slave. Either way, Vect managed to claw his way to his current position through his own skills and intelligence, upending Drukhari society in the process by usurping the power of the old noble houses and creating the Kabalite system that now defines the power structure of Commorragh. In the wake of the dysjunction that followed the partial awakening of Ynnead, the God of the Dead, and the opening of the Dathedian, the Great Rift, Vect was apparently assassinated by unknown hands. The Supreme Overlord made his triumphal return at his own wake, however, where he slaughtered his detractors, solidified his rule of the Dark City and declared himself a Dark Muse, wicked slaughterers and dark artists who are the closest things to saints or demi-gods that the Drukhari honour. 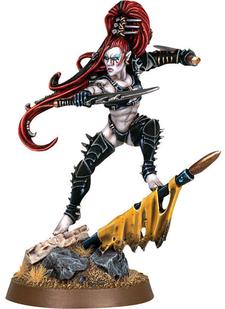 The crowd hushed at the very sight of her beauty and elegance. Her flesh bared as if to taunt the blade to draw her blood. Her hair loose as if to tempt her adversary to grip it and to strike the death blow. This was the way she liked to perform: so calm, so confident, so cold. The crowd gasped as she brandished her chosen weapons: a flashing of ice-cold silver, the kiss of death. Then the aliens were released into the ring. Not one, nor two, but ten assailants at once. Lelith danced with them, gifting each with a single choice wound. The crowded roared their approval, the entertainment would last long into the bloody evening!
— Lord Sussarkh

The greatest Wych to have ever lived, Lelith Hesperax is the undisputed queen of Commorragh's arenas. Although she is the Succubus leader of the Wych Cult of Strife, the most powerful and influential Wych Cult in the Dark City, Lelith rarely involves herself with the politics of the Drukhari, caring for little except the chance to test her flawless skill against the greatest warriors and beasts of the galaxy. Although she was once considered a rival in the arena, Lelith has nonetheless defied the will of Asdrubael Vect and assisted Yvraine, and her Ynnari followers, in their fight against She Who Thirsts. As is typical of the fickle Succubus however, she does this to fulfil her own goals, rather than through any belief in the mission of the Reborn, as she hopes the conflict against Slaanesh will allow her to fight some of the most skilful warriors of the Dark Powers. 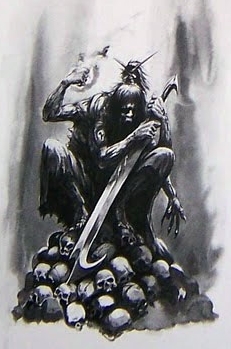 A mysterious and ancient Mandrake murderer, Kheradruakh spent millennia collecting the most perfect skulls of his seemingly random victims to perform a dark ritual within his lair. The Decapitator completed his ritual in the final years of the 41st Millennium, during the Dysjunction caused by the resurrection of Yvraine the Emissary of Ynnead, succeeding in summoning a section of Aelindrach, the shadow-realm of the Mandrakes, into the districts of Commoragh. Revealing himself to be the lost King of the Mandrakes, Kheradruakh rules his people from this benighted realm as a murderous saint.

Archon of the Kabal of the Poisoned Tongue, Aurelia Malys was once have been one of Asdrubael Vect's spurned consorts who has since risen in stature to become second only to the Supreme Overlord himself in power and influence. Some within the Dark City believe that this meteoric rise was aided by an encounter with Cegorach during her exile where the Laughing God rewarded her with his own heart for defeating him in a game of wits. Whatever the truth of the matter, Lady Malys is renowned for her intellect and her near supernatural ability to predict her enemy's plans. One of the few rivals to Vect's position to survive the slaughter of the Great Wake, Lady Malys and her followers are content to play the long game, waiting and watching the power struggles within Commorragh from the webway.

After growing bored of Commorragh's political manoeuvrings, Traevelliath Sliscus stole three kabal flagships before fleeing the Dark City for life as a Corsair Outcast. Now one of the most infamous Drukhari Corsairs, Sliscus and his fleet, the Sky Serpents, have plagued the galaxy for millennia and the Duke has become a champion for Commorrite exiles. Incredibly ruthless and eccentric, Sliscus often cares more about style over substance, willing to sacrifice his own ships if it means destroying his enemy in a suitably impressive manner. Despite his vanity and quirks, Sliscus is a highly accomplished warrior and tactician, having even outwitted and defeated the notorious Space Wolf warrior Lukas the Trickster. 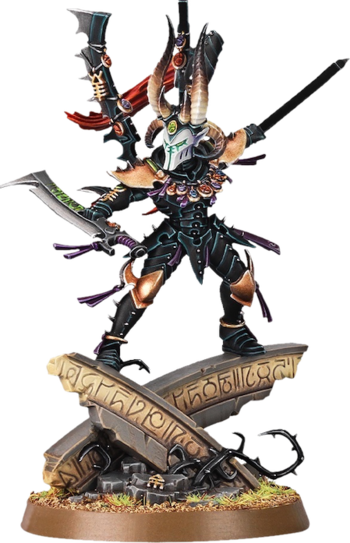 A mysterious but superlative warrior, the Incubus known only as Drazharnote an honorary title that means Living Sword first rose to prominence when he entered the Great Shrine of the Incubi in Commorragh and challenged the ruling Hierarch to personal combat. After slaughtering the guards who tried to stop him, he challenged the Hierarch to a duel. Minutes later Drazhar stepped over the dismembered Hierarch, cleaned his blades and made a small bow. Although he never took up the position as Hierarch, as was his right, Drazhar is highly honoured by all Incubi for his unsurpassed skills and is considered to be the greatest champion of the order. 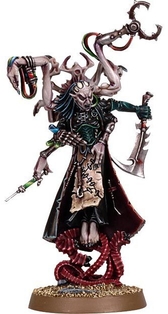 Fetch me another plaything. This one seems to have broken.

The master of the Haemonculus Coven known as the Prophets of the Flesh, Urien Rakarth is the oldest and greatest of his twisted kind. An insane genius in the fields of torture and anatomical flesh-sculpture, Urien considers himself above the petty politics of the Dark City, preferring to indulge himself in increasingly twisted and depraved experiments. Competition is fierce between those who wish to acquire the services of the Sculptor of Torments, something the ancient Haemonculus is more than willing to take advantage of to acquire new specimens. Since they first took to the field in the aftermath of the opening of the Great Rift, Urien has become increasingly interested in Humanity's latest warriors, the Primaris Marines, and the Master Haemonculus has made it his mission to acquire samples from as many Astartes Chapters as possible. 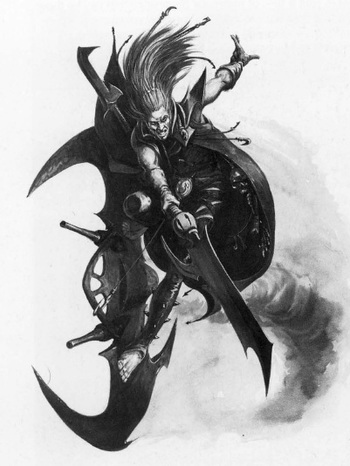 Formerly a highly placed member of the Kabal of the Slashed Eye, Sathonyx was cast out by his fellows for bringing a captive Farseer into his Archon's court, despite psykers being taboo within the Dark City. Despite the high price placed upon his head, Sathonyx escaped into the darkest districts of Commorragh where he raised an army of exiles and renegades to get revenge on Archon Cythrax for his banishment. Considered by many to be the most influential of the Hellions who ply the skies of Commorragh, Sathonyx continues to lead his gang of disposed, using the bones of the Farseer who instigated his fall from grace to stay out of reach of his enemies. 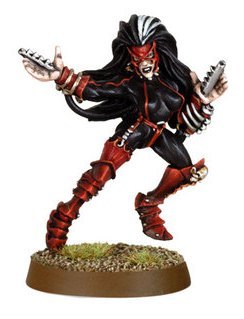 An Archon of the Kabal of the Flayed Skull, Kruellagh the Vile leads the Emasculators, an elite force of Kabalite Warriors who specialise in precision assaults. Kruellagh has plagued the Imperium since the 38th Millennium and has gained a reputation for being a sadistic raider who revels in the terror and death she spreads.

We are swift, and we are lethal. We are a poisoned dagger thrust into the heart of the foe. We are the hidden blade, the strike so sudden that the enemy falls before they ever know they are under attack.