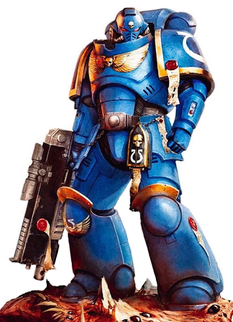 "They were forged for Mankind's darkest hour - and that hour is upon us."
— Roboute Guilliman
Advertisement:

In the bloody aftermath of the Horus Heresy, Roboute Guilliman charged the Archmagos Cawl with the creation of a new legion of soldiers to defend the Imperium in its next darkest hour. From that moment forth, Cawl worked upon the improvement of the Astartes, attempting to refine both their enhanced biology and their equipment. Obsessively working on his mission for the next ten millennia, the opening of the Great Rift and Guilliman's resurrection saw the Archmagos finally unleash his creations upon a shattered galaxy. The Ultima Founding, as it is known, saw Cawl's new breed of Astartes, the Primaris Space Marines, reinforce the existing Chapters, as well as the creation of a large number of new Chapters made up entirely of Primaris Marines. Guilliman was also forced to rewrite his magnum opus, the Codex Astartes, to reflect the new threats of the dark new era that the Imperium now found itself in.

Introduced for the 8th Edition of Warhammer 40,000, Primaris Marines are the newest fighting force of the Imperium. Stronger, faster and larger than their brethren, with their gene-seed enhanced by the eccentric Archmagos Dominus Belisarius Cawl, they are also equipped with some of the most advanced armour and weaponry available to the Imperium.

Primaris Marines field Captains, Lieutenants, Ancients, Librarians, Chaplains and Apothecaries that share the same tropes as those of their regular Astartes brethren. Tropes unique to the Primaris version of these officers include: 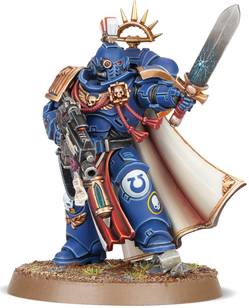 As with their regular Astartes brethren, those Primaris Marines who rise to the rank of Captain combine martial skill, tactical brilliance and inspiring leadership to produce a warrior worthy of leading the Emperor's Angels of Death into battle. Armed and armoured with masterwork equipment from the workshops of Belisarius Cawl, Primaris Captains often lead from the front, inspiring the warriors to fight with even greater spirit. 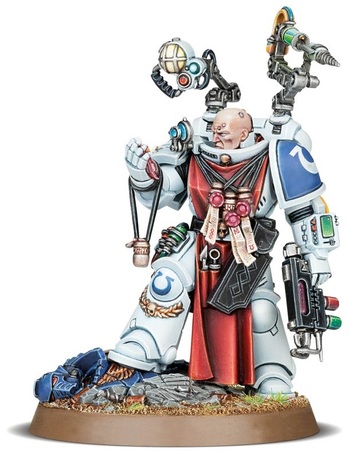 As with traditional Astartes, some Primaris Marines receive training in their Chapter's Apothecarion so that they can minister to the wounded. Primaris Apothecaries also collect the gene-seed of the fallen, with a specialist redactor pistol, to ensure the future of the Chapter.

Apprentice Chaplains, Judicars are charged with keeping their Astartes battle-brothers in line and executing those among their ranks who disobey orders. 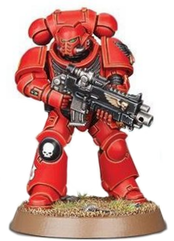 The Primaris battleline units, Intercessor squads are roughly equivalent to the Tactical Squads of the regular Astartes. Clad in Mk.X Tacticus power armour and armed with the Cawl-pattern bolt rifle, a refinement of the iconic weapon of the Astartes, Intercessors excel in the deployment of focused firepower that can overwhelm all but the most formidable foe. 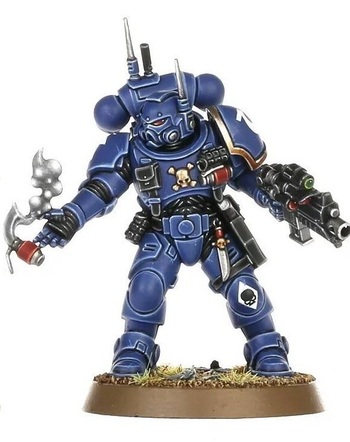 The battleline unit of Primaris Vanguard strike forces, Infiltrators are fast-moving and self-sufficient units often tasked with disrupting the foe's vox-links with their sophisticated omni-scramblers or sabotaging enemy communication posts. Once battle is joined, Infiltrators engage the enemy from concealed positions, bringing down their foes with pinpoint fire from their marksman bolt carbines. 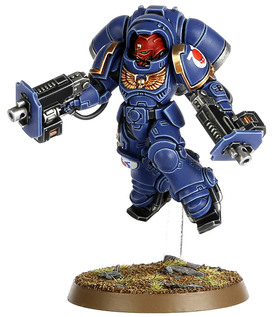 "To fall upon the enemy with meteoric fury, death blazing from your clenched fists, armoured body impervious to shot and blade, and to tear the heart from the foe – that is the way of the Inceptor, and it is a doctrine that has seen the foul xenos defeated time and time again."
—Watch Captain Corvean

Often forming the spearhead of an assault by Primaris Marines, Inceptors are drop troopers who specialise in rapidly deployment into the heart of an enemy formation before unleashing punishing fire at near point-blank range. The speed and shock of their assaults leave their foes reeling and easy prey for a follow-up attack by their battle-brothers. 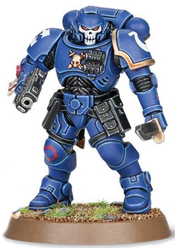 "Terror is at its sharpest when the certainty of death is first revealed – the moment the blade is drawn, the instant the fangs are bared. After months on the hunt, the fear in the eyes of a heretic is a sight more joyous than any victory feast. The Allfather's wrath will befall them, and I am become his worthy instrument."
—Arnar, Blackmanes Reiver

A Primaris close support unit, the Reivers are highly trained assault troops sent into battle with the objective of destroying priority targets while instilling fear into the hearts of the enemy. Appearing as if from nowhere, the sudden assault of a squad of Reivers can shatter the morale of all but the most disciplined soldiers, making them easy prey for the rest of the Astartes Strike Force. 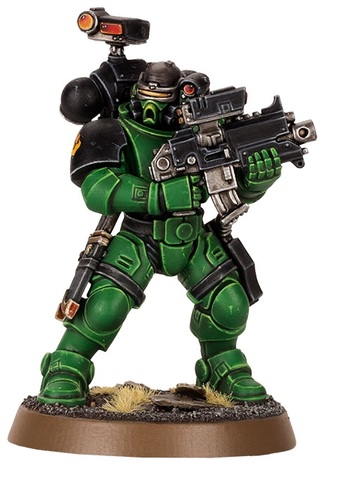 A Primaris Vanguard close support unit, the role of Incursor Squads is to infiltrate and storm enemy defensive positions, such as trench lines and fortresses, and to destroy the foes strategic assets, such as power generators and munition supplies. Equipped with highly advanced Divinator-class auspexes that link directly to their occulus bolt carbines, Incursors can target their foes through almost any cover, while their razor-sharp combat knives can make short work of enemy soldiers once things get close and personal. 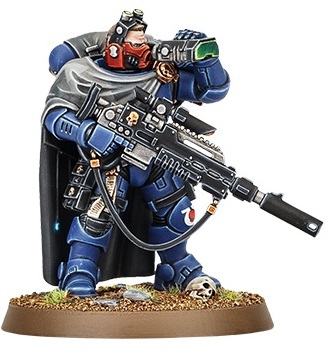 A fire support unit of the Primaris Vanguard formations, Eliminators are talented snipers who are able to take out almost any target. Armed with Mk.III Shrike-pattern bolt sniper rifles, Eliminators are equipped with various types of specialist ammunition for any situation. Whether it is targeting artillery crew or enemy commanders, Eliminators destroy their targets with pinpoint fire. 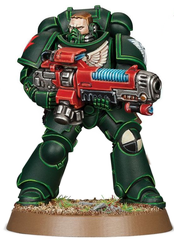 Hellblasters are the most common fire support squad utilized by the Primaris Marines, providing mobile firepower in support of their battle-brothers assault. Equipped with some of the most advanced, man portable plasma weapons produced by the Imperium, Hellblaster Squads incinerate their enemies with the power of a solar flare. As with all Imperial plasma weapons, the plasma incinerators used by Hellblasters are highly dangerous when used at full power, leading to many such squads gaining a reputation for martyrdom and self-sacrifice. 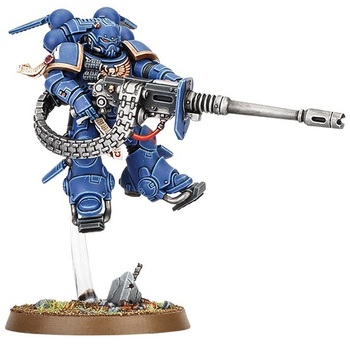 A rapid response fire support unit most commonly utilized by Vanguard formations. Suppressors use their grav chutes and jump packs to quickly position themselves to engage any enemy threat on the battlefield before laying down withering fire with their accelerator autocannons. 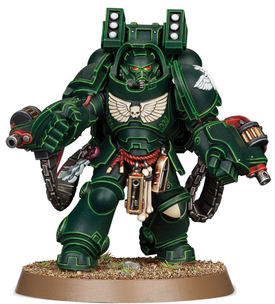 "Burn the heretic from his lair. Put the torch to his foul idols, and cast all that he treasures into the flames. Only then, when he realises the true cost of his perfidy, grant unto him the oblivion he deserves."
— Aggressor Zyphan Torl

Wearing armour that turns them into a veritable walking bunker, the Primaris heavy infantry known as Aggressors specialise in unleashing overwhelming firepower at short range. Their heavy, but mobile, Gravis armour and their ability to fire on the move make Aggressors particularly effective when operating in dense terrain such as urban environments and trench warfare. 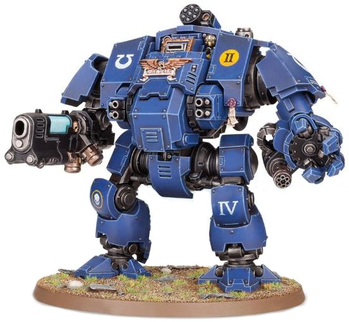 Bigger, tougher, and harder-hitting than even the ancient marks of Dreadnought used by standard Astartes, the Redemptor Dreadnoughts piloted by mortally wounded Primaris Marines are advanced combat walkers created by Belisarius Cawl. Fitted with sophisticated systems and armed with a range of deadly weaponry, a Redemptor can unleash tremendous carnage upon the foe while exhibiting speed and dexterity far in excess of that displayed by their more lumbering forbears. 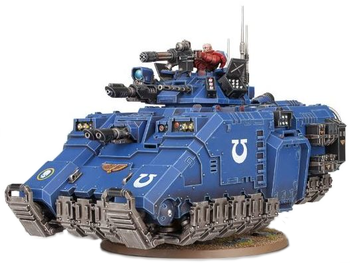 "Barricades, is it? And reserves doubtless lurking in the ruins behind, poised to ambush. Send in the Repulsors, and leave nothing but rubble and dust"
—Captain Aphael of the Blood Angels at the Siege of Kardalla

The primary armoured personal carrier used by Primaris Marines, the Repulsor armoured transport is a huge grav-tank that combines brute force with the ability to traverse any terrain. Following the same "heavily-armed and armoured multi-purpose vehicle" design philosophy as the Land Raider, the Repulsor is able to unleash a storm of heavy fire from multiple weapon systems while safely carrying its cargo of Primaris Marines into the heart of the enemy battle line. As with many Imperial vehicles, there variants of the Repulsor that fulfil various different battlefield roles, such as the Repulsor Executioner heavy transports and the light Impulsor reconnaissance transport.