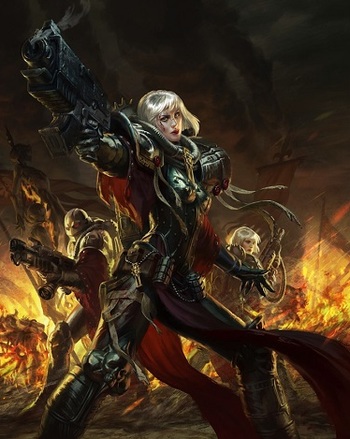 In the name of the Emperor, thou shalt be purged, heretic!
Advertisement:
We are beset by many terrible foes in these dark times, but we walk in the light of the Emperor, and we shall not let a single foe stay us from our duty. We are the Sisters of the great Ecclesiarchy, and we will fight to the bitter end.
— Canoness Palmiro of the Order of the Ebon Chalice

In Warhammer 40,000, the Adepta Sororitas are an organization of zealous nuns within the Ecclesiarchy. While many of their Orders provide services such as administrative support, education, and health care, their most famous Orders are the militant ones, known as the Sisters of Battle, power armor-wearing warrior nuns whose fanatical faith in the Emperor pulls them through impossible odds.

Their origins go back to the Age of Apostasy, where they were a minor but devout order of warrior women called the Daughters of the Emperor. High Lord Goge Vandire deceived them into believing that he was favored by the Emperor by using his empowered Rosarius to stop a bullet being fired at him, claiming that it was by the grace of the Emperor that he survived. He then turned them into his own personal army, renaming them to the Brides of the Emperor. As Vandire's Reign of Blood intensified, the rebellion known as the Coalition of Light rose and fought its way to Holy Terra itself, with the mad High Lord holed up in the Imperial Palace. Thinking that Vandire's army consisted only of fanatical but untrained mobs, the Coalition stormed the palace expecting it to fall easily. To the surprise of many, the well-entrenched Sisters proved more than a match to the Coalition, which included the Imperial Fists chapter and its successors, the premier siege-specialist force of the Imperium. Seeing this stalemate, the Emperor's Praetorian Guard, the Adeptus Custodes, arranged for Alicia Dominica, the leader of the Brides, to meet the God-Emperor. What happened during the meeting is unknown, but Alicia, now full of righteous fury after emerging from the Emperor's chambers, wasted no time in executing Vandire, ending the Age of Apostasy. After that, they were reorganized as the Adepta Sororitas, and continue to serve as the Ecclesiarchy's militant arm through a loophole in the Decree Passive (no "men" under arms)note in some versions all parties agreed to that wording specifically to allow their continued service.

As of the 41st millennium, the Adepta Sororitas consists of six Major Orders and numerous Minor Orders:

The Sisters of Battle were the last faction to receive a codex during the 2nd Edition of Warhammer 40,000 and were then combined with the Inquisition’s Ordo Hereticus for 3rd Edition’s Codex: Witch Hunters. 2011 saw the publication of a Chapter Approved White Dwarf Sisters of Battle army list for the game’s 5th Edition. During the 6th Edition of Warhammer 40,000, the Sisters were officially renamed the Adepta Sororitasnote a pre-existing, if rarely used, name that was their original title before the release of the 2nd Edition codex and received Games Workshop’s first ever digital-only codex sourcebook, before being included alongside other Imperial sub-factions in 2016’s Codex: Imperial Agents for 7th Edition. The 8th Edition beta version of of their rules were included in the Chapter Approved 2018 rules supplement released in December 2018, with the full Codex: Adepta Sororitas given an early release as part of a limited edition Army Box in November 2019 before the full release in January 2020. 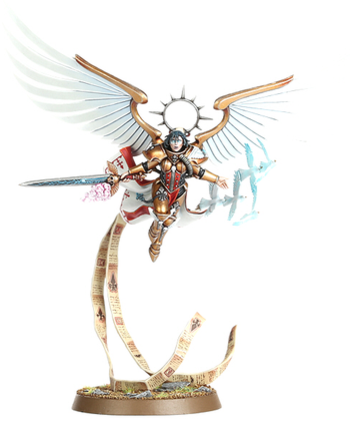 She was an angel, pure as righteous destruction. She laid low the twisted and lifted the hearts of the righteous. At her passing, a million voices cried out her name. Shall we ever again see her like? No, not now, nor ever again...
— Sister Patricia of the Order Famulous, speaking of Celestine's disappearance

Celestine is one of the Living Saints, a handful of extremely important people in the Imperial faith who have displayed miraculous powers and have been canonized by a conclave of the Ecclesiarchy and the Inquisition. Formerly a Sister Repentia of the Order of Our Martyred Lady, she was killed during the Palatine Schism but was apparently resurrected. After undergoing a holy transformation on Sanctus Lys, Celestine was declared a Living Saint.

Junith Eruita, Canoness Superior of the Order of Our Martyred Lady 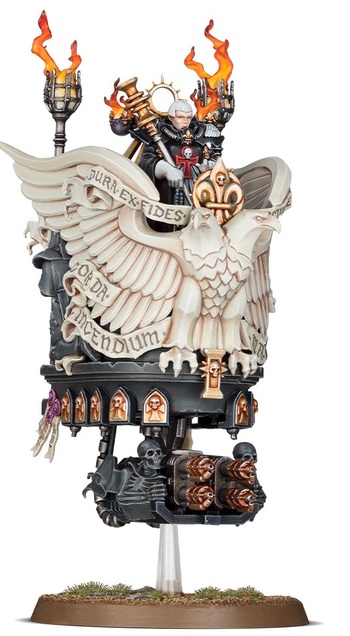 The Blazing Heart
With flamer, bolter and melta do we purge our enemies. With power armour do we turn aside their cruellest blows. With doctrine and with strategy do we win our battles. Yet it is faith, Sisters, and faith alone that we shall conquer this sinful galaxy.

Noted for possessing such an intense faith that even the drill-abbots at her Schola Progenium found remarkable, Junith Eruta had been marked for greatness since her youth, and eventually rose to become the martial and spiritual leader of the Order of Our Martyred Lady during the Indomitus Crusade. A passionate and inspirational leader, Junith inspires absolute faith in the Emperor in all those around her and has put countless heretics, mutants and xenos to the touch in the years since her ascension. 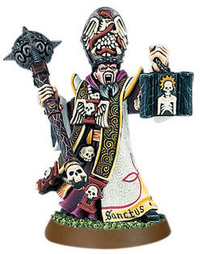 Arch-Confessor Kyrinov is renowned across hundreds of worlds for his fiery speeches and ruthless pursuit of heresy. Kyrinov’s impassioned oratory and flamboyant preaching hides the mind of a master manipulator who is totally dedicated to the destruction of the Ecclesiarchy’s foes.

Uriah Jacobus, Protector of the Faith 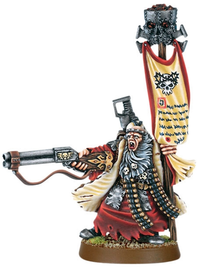 Death in service to the Emperor is its own reward. Life in failure to Him is its own condemnation.

Uriah Jacobus was a missionary in the Segmentum Tempestus who received renown for converting more than 20 worlds to the Imperial Cult. He also uncovered a Genestealer cult on the planet Solstice and led the army that eventually defeated it. 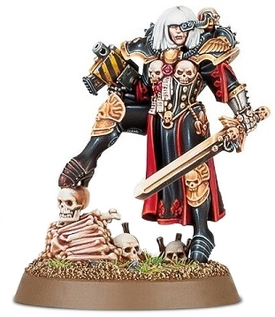 Veridyan is a Canoness of the Order of Our Martyred Lady. A fearless and devout warrior with a keen tactical mind, she has led her Order to victory time and again in countless battles, cutting down all who stand against the light of the Emperor with precision strikes of her bolt pistol and power blade.

The Emperor is our Father and our Guardian, but we must also guard the Emperor.