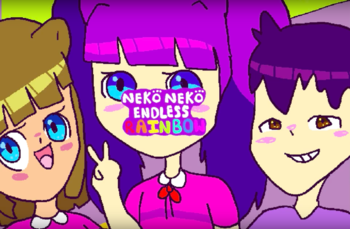 . The series claims to be a Spiritual Successor to Nyan~ Neko Sugar Girls, only if it was ten years after the events of its predecessor. However, rainbownekogirl doesn’t seem to be affiliated to the creator of Nyan~ Neko Sugar Girls at all. The series follows the purple twintailed cat girl Kuron-chan, her friend Panchi-chan, and the guy she is crushing on, Baddo-senpai. As of January 2020, two episodes have been released so far. The first episode can be watched here

Tropes that Neko Neko Endless Rainbow provides an example of: