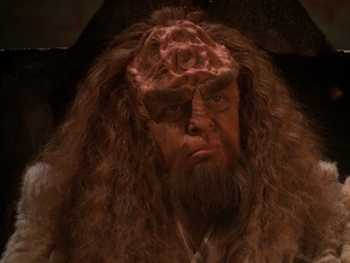 Behold! Klingon Jesus has returned! And so have his ridges!
Advertisement:

Ever since the events of "Birthright", Worf has been out of sorts. In the course of teaching young Klingons who hadn't been raised as Klingons about their own culture and beliefs, he's come to realize that he doesn't really believe those things anymore himself. So he plunges headfirst into Klingon spirituality, engaging in marathon meditation sessions and inhaling (presumably) mind-altering smoke, in the hopes of connecting with something greater than himself. Unfortunately now it's starting to affect his work performance.

After Worf explains himself, Captain Picard, ever the Reasonable Authority Figure, permits him to take some time off to get his head together. He opts to head to the planet Boreth, the most sacred place in the Klingon religion. According to Klingon scripture, the great spiritual teacher Kahless the Unforgettable, just before leaving his people for parts unknown, pointed to a star and told his followers, "Seek me on that point of light." Boreth is the planet orbiting that star, and devout Klingons pray and meditate there waiting for his Second Coming.

Ten fruitless days of meditation later, Worf is about ready to pack it in (especially after a boy who just got there has a vision and he hasn't yet). But Koroth, High Priest of the temple, encourages him to stay a little longer. Faith requires patience and sacrifice, after all. Spiritual revelation doesn't come on a strict timetable. The priests of Boreth have been waiting 15 centuries; what's a few more days to one man?

This turns out to be good advice. Shortly after returning to the shrine, Worf has a vision. Kahless himself appears before him, and beckons him to approach. Worf is overjoyed...then startled when he's actually able to touch Kahless. It's not a vision. He's real.

Kahless makes himself known to everyone at the temple and tells a story about the origin of the batl'eth that the priesthood deliberately kept secret from the populace to use as a means of verifying Kahless' identity. He claims that he has returned to the Klingon Empire in its hour of greatest need, to heal the fractures in the Empire caused by politics and infighting and lead it back to honor and glory. Worf tries to maintain a healthy skepticism despite his need to believe, going so far as to bust out his tricorder and scan Kahless's life signs (he's Klingon; that much he can confirm). Kahless, to his credit, takes this in stride, but when Worf persists in his skepticism, Kahless finally engages him in combat. The fight ends in a draw, mainly because Kahless breaks it off before it's over to praise Worf for finally embracing his Klingon roots; Worf persisted in his convictions and showed courage in battle, rather than mere bloodlust, and that's what a Klingon should be. This is enough to convince everyone else at Boreth, but Worf is still unsure.

Meanwhile, word has reached the Klingon Empire about this purported Second Coming. The Enterprise has been asked to head to Boreth and pick up the alleged Kahless and escort him to the Klingon Homeworld. Furthermore, Klingon Chancellor Gowron himself is going to meet them halfway, and he's bringing with him a sacred relic allegedly stained with the blood of the original Kahless for DNA testing. The priests of Boreth are incensed by this act of sacrilege, but they can do nothing about it. And it turns out, they didn't have to worry. The DNA is a match. This Kahless is the Kahless.

The crew of the Enterprise puzzle over this development. Gowron, meanwhile, couldn't care less about the scientific evidence. He just assumes this whole thing is a power play by the priests of Boreth. He notes that divisions are starting to form in own ship's crew, believers versus skeptics, and that may be just what the priests want. Gowron points out that it's awfully convenient that "Kahless" first appeared to Worf, and right before he was about to leave Boreth for good. After all, if Koroth and his sect are looking to gain some serious political clout, they couldn't do much better than having the illustrious Worf, Son of Mogh, on their side.

For his part, Worf is caught in the middle. He desperately wants to believe that this is really Kahless, but he knows logically that it doesn't make sense. Furthermore, the more time he spends around Kahless, the more oddities Worf begins to notice about him: Kahless seems to have a lot of gaps in his memories. He knows the stories that have been written down in scripture, but he can't remember the fine details that someone who was actually there would remember. He can't tell the difference between a synthesized Klingon drink and a real one, even though it should be obvious to anyone who's drank it. And when Gowron finally confronts him, and they engage in combat, he loses. Gowron hands the Klingon Messiah his ass in front of all his followers, and then just smugly strolls away.

Kahless himself is shocked by the outcome, while the priests try to run damage control. And Worf has finally had enough: He demands to know what's going on here, or else he's gonna just kill them all. Finally, Koroth relents and tells the truth.

The Kahless sitting in the room with them right now is a clone, grown from some blood the order has carefully preserved. His memories are artificial, implanted from scripture. Clone Kahless himself is confused and disturbed. He believed he really was Kahless, and he genuinely wanted to help his people regain their former glory. Indeed, the priests of Boreth had the best of intentions: They saw the corruption in the Empire, and they thought if they gave the people a figure to unite behind, things would get better.

Now in on the secret, Worf ponders what he should do: stand with the priests of Boreth in service to a well-intentioned lie, or expose them as frauds. He visits the makeshift shrine that Clone Kahless established in the ship's holodeck and realizes that not even seeing their Messiah defeated was enough to shake the faith of his followers. The Klingons' need to believe in something greater is just that strong... and perhaps just that dangerous. Gowron may be right, but so is Koroth.

Worf gets all the interested parties together and offers a solution: install Clone Kahless as Emperor. The Klingon Empire being something of a representative oligarchy, the Emperor would have no political power whatsoever (in fact, the seat's been vacant for three centuries), but he could serve as a spiritual guide. After all, Koroth has a point: the Empire is in trouble. Worf knows better than anyone how corrupt things have become, and he knows that they could all use a reminder of what they were supposed to be. And even though he's not the real Kahless, this clone, who is basically the walking incarnation of Klingon scripture, could be his Rightful Heir.

Gowron agrees to this, begrudgingly, and everyone goes their separate ways. Worf returns to active duty, with the blessings of Kahless the Second, secure in the knowledge that he's living by Kahless's teachings.

Tropes Features in "Rightful Heir" include: