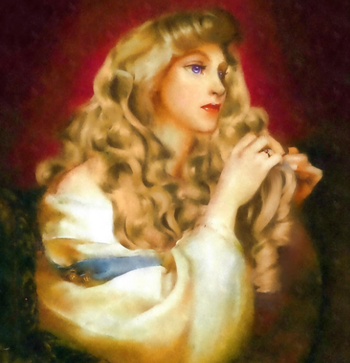 "My great grandmother, Queen Aurora. Gold of sunshine in her hair, lips that shame the red rose... that is how she's described in the old songs... Although there are many versions of her story, at the end she safely returned home and lived Happily Ever After with her true love."
Once Upon a Time, there was a beautiful princess cursed by the evil witch Maleficent to prick her finger on a spinning wheel, and die on her 16th birthday. In order to prevent this, she was sent off to live in the woods with three good fairies, but fell to Maleficent's magic and the curse came true. Luckily, her prince came just in time to kill the evil witch and save her with True Love's Kiss, and the two lived happily ever after.

Everything isn't well with Briar Rose. She's been having horrific dreams (not helped by her husband off fighting in a war) that she just can't seem to stop, no matter what she tries. Even returning to her old home with her "aunts" doesn't do anything. That is, until she meets an old witch, who offers to help her with all of her problems if she takes just one bite of an apple. She accepts, but proceeds to have an even worse dream, one that's shared with a queen from another world, one who seems to be having the same nightmares as her own.

Thus begins The Little Crooked Tale, leading not only Snow White and Aurora into a world of magic beyond their wildest dreams, but Belle, Jasmine, Cinderella, and Ariel as well. They discover that their greatest foes are returning with the help of an evil man known as Rumpelstiltskin (or Dorian Grey), and all the powers of Hell.

The story is currently written by Sonne and illustrated/translated by Breadfly. There are two versions of the story, the first illustrated by him, and the second by her.

Tropes that apply to Version 2