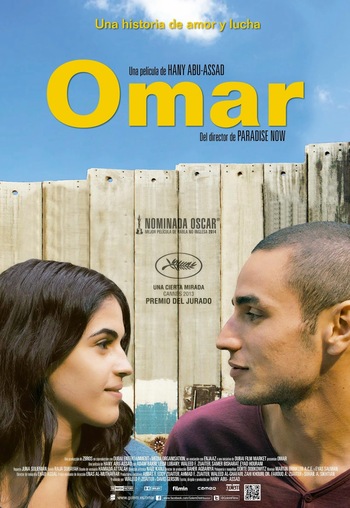 Omar is a 2013 film from Palestine, directed by Harry Abu-Assad.

Omar is a young man growing up in the occupied West Bank. He's in love with his best friend Tarek's sister, Nadia, and hopes to marry her. He is also part of a little guerilla cell along with Tarek and their other friend, Amjad. After training with a rifle they go out one night and successfully shoot and kill an Israeli soldier guarding a checkpoint, with Amjad reluctant being the one to pull the trigger.

The three make a getaway, but Omar is soon scooped up in an Israeli raid. He is tricked into a confession by an agent named Rami (Waleed Zuaiter). Facing a 90-year prison sentence, and after a good deal of torture, Omar agrees to turn informant and help Rami capture Tarek, whom Rami thinks was the shooter. However, after he's released Omar tells Tarek everything and they plan to turn the tables with an ambush on the Israelis. But there are still more betrayals.