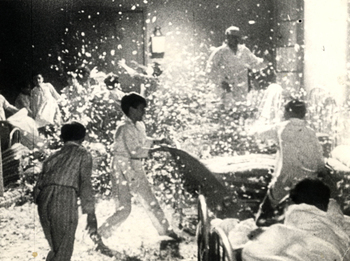 It is set at a particularly repressive boarding school for boys that in fact operates more like a prison than a school. The food is monotonous, nothing but beans. Students march in military drill. The teachers punish the tiniest infraction with detention that keeps them on the grounds on Sunday, otherwise their only day of liberty. One teacher, an odd fellow named "Beanpole", steals from the students. Another teacher—the chemistry instructor, who creepily caresses a boy's hand—has his own issues.

Three of the older boys, Bruel, Caussat, and Colin, are regarded as particular rebels. They take under their wing Tabard, a smaller boy and the one who was disturbingly caressed by the chemistry teacher. The boys, tired of their poor treatment, rise in revolt.

This tale of student rebellion was seen as dangerous left-wing allegory in France and banned for years. Later inspired an English movie about boarding-school rebellion, If....