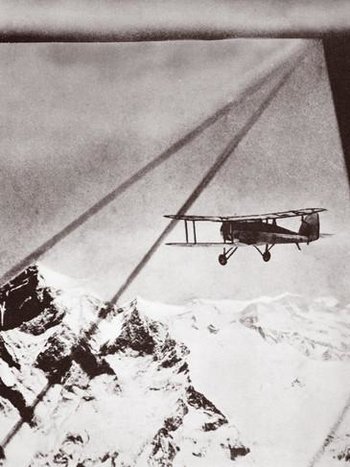 Wings Over Everest is a 1935 short film (22 minutes) directed by Geoffrey Barkas and Ivor Montagu.

It is a documentary short recounting the first Real Life attempt to fly over Mount Everest. This had never been attempted before, and it was no small feat in the 1930s when most airplanes did not fly anywhere near as high as the 9000 meters or so required to clear the mountain. Lady Lucy Houston (who, the film does not mention, was once a showgirl) agrees to fund the expedition. A party of adventurers led by Douglas Douglas-Hamilton, the Duke of Hamilton, then set out to conquer the mountain. The planes are assembled in England and then sent by boat to Karachi, India—not Karachi, Pakistan, but India, because this is The Raj.

The men wait for day after day to make their historic flight. Finally, when the weather clears, they go up on April 9, 1933 in two unpressurized biplanes, breathing bottled oxygen as they fly. Failure will mean death, because even if they survive a crash landing, they'd be stuck in the Himalayas without any gear or supplies. In the end they succeed, and wind up taking the first film footage of the "Top of the World".

In Real Life the actual expedition

successfully made a second flight a few days later, because dust fouled up the still cameras of the first flight and prevented them from taking photos.