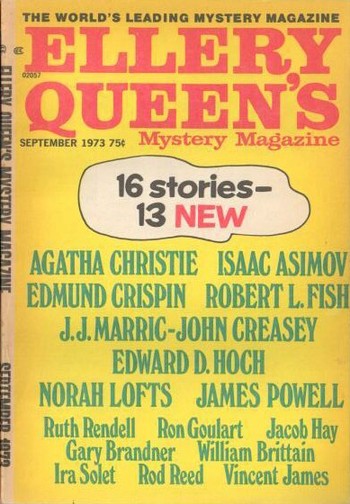 The 8th story in the Black Widowers case files, Isaac Asimov wrote it for Ellery Queen's Mystery Magazine (September 1973 issue), under the title of "A Warning to Miss Earth".
Advertisement:

Gonzalo is host, and his guest is Aloysius Gordon, a plainclothes police officer from the 17th Precinct. His presence makes the members uneasy, and it's made clear when Trumbull quietly rants at Gonzalo. Things only get worse when Mr Gordon admits he's here because he wants to question Henry.

After dinner, Trumbull is given the role of inquisitor again, and he asks why Mr Gordon is present. He has a puzzle that he'd like help with, and Gonzalo had told him Henry was skilled at solving them. A piece of paper was left as a clue, and he's curious if Henry can deduce the meaning from it. The paper is passed around, and the members read the note.

The members try their best to deduce the meaning, and Mr Gordon shares more context behind the note. It was a declaration of murder at a Miss Earth contest. Henry, naturally, has no clue which of the sixty contestants is targeted, or if the message applies to all of them. The members have to volley around the details of the message, reading various passages from The Bible, before Henry is able to deduce the correct meaning from the clues assembled. Mr Gordon confirms that Henry's suspicion is correct, because these events took place last year.

This story has been reprinted in Tales of the Black Widowers (1974).

There they are, tropes of Miss Who?