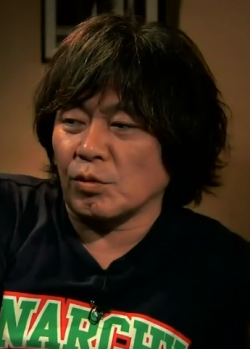 Crosshatching and ink flow through his veins
Advertisement:

Tsutomu Takahashi is a mangaka born in Tokyo. He made his debut with Jiraishin, which remains his most well-known work, and has continued to remain quite prolific since, with a large body of works published.

He isn't really a popular name overseas; all of his works have been published in seinen magazines, which attract smaller crowds to begin with, but none of them have been published in North America (except for Jiraishin's brief stint in Tokyopop's Mixx Zine under the name Ice Blade), making him pretty obscure.

He is known for his unrelentingly dark, cynical, Film Noir style storylines (the aforementioned Jiraishin, Skyhigh, Sidooh), which were especially prevalent in his early career. Since then his work has softened a bit, with Hito Hitori Futari still being noticeably dark in some areas but much more breezy and optimistic compared to his earlier work. He isn't really pigeonholed into one particular genre or subject matter, having written crime thrillers, sports, supernatural horror, and even slice of life.

He is also famed for his very distinctive artstyle, which is frequently described as "sketchy"; he uses very thin lines and large, deep areas of black, in a way that seems both haphazard and calculated at the same time, with his characters also being very stylized. It feels like a style that takes full advantage of the black and white nature of manga. In fact, Tsutomu Nihei worked as his assistant for a while, and it's likely that he inherited a lot of his own "sketchy" inking sensibilities from him.

Tropes related to Tsutomu Takahashi and his work: