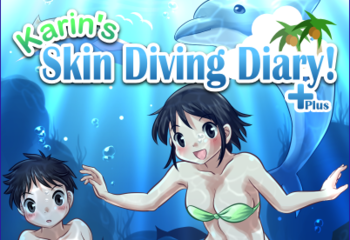 Dive in for fish, for cash, and for sexy swimsuits!

This game stars the titular Karin, who first appeared in At Night in a Party: The Whisper of the Sea. She enjoys helping her grandfather Ziji mine for fuel stones in their home of the Shanties Islands, but this resource was quickly running low. Karin later on gained a passion for underwater skin diving and took an interest in finding more fuel stones in the sea floor. But Ziji was worried that Karin would accidentally drown herself from doing this. So he supplied her with a support robot named Cubot. Cubot will monitor Karin while she's underwater and make sure to rescue her whenever she was on the verge of drowning.

The longer Karin stays underwater, the more EXP she gets, leveling up increases the speed the player's bonus rate rises, and the money you get after completing an operation is the amount of points you have from collecting fish multiplied by the final bonus rate you have. The materials that you gather can also be used to make the operations easier, such as scaring away unwanted fish, or reversing their value upon being caught.

Of course, this being a Fox Eye game, drowning is a prominent danger. If Karin drowns during a dive, the dive ends and the player is penalized with a 0.5 bonus rate, minimizing the amount of money they receive from the fish they collected.

This game is a short Slice of Life of sorts that focuses on Karin's love for sea life and completing tasks for people that she meets, such as gathering certain materials and solving puzzles. Completing tasks unlocks more swimsuits Karin can wear, and gain access to more areas that she can dive into. But by the end, you are simply free to keep collecting fish in exchange for money in order to unlock diary episodes that go more in-depth on Karin and her friends' lives on the Storia Islands through artwork and storytelling. While the game looks innocent enough on the surface, this is also the second "Fox Eye ABYSS" game after BLUE GUARDIAN: Margaret, which means that all of the female characters are allowed to avert Nipple and Dimed unlike all non-ABYSS Fox Eye games, alongside other risque moments featured in the game.

Interestingly, this game was originally going to be released for smartphones, first, but Fox instead made it available for PCs. This is the main reason why the game has a more vertical window display while it's running, as well as mouse-only controls due to their seamless correlation to touchscreen controls. A true smartphone release may be coming down the line, however.

The page image shows the English version of this game, which is the 2018 Updated Re-release known as Karin's Skin Diving Diary! plus, which contains some new postcard artwork not found in the original Japanese release. The Japanese version of plus was released later, and Japanese players of the original version of the game can carry over their save into it.

A spinoff title, In the Aquarium: Sinking With Kana, was released in 2019. It is an art collection that can be read like a short Visual Novel, starring the titular Kana, one of Karin's friends.

Info on the game can be found on its website here