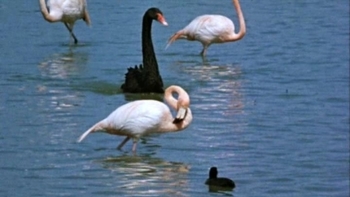 It was made by Disney as part of its True-Life Adventures series of nature documentaries. It is a documentary about, well, water birds. The film captures the hunting patterns, mating habits, and everyday behaviors of a range of birds that live around water—terns, gannets, albatross, ducks, and more. (Birds native to North America, so penguins don't make the cut.). As with many Disney nature documentaries, the editing is done to make the behavior of the birds as anthropomorphic as possible.