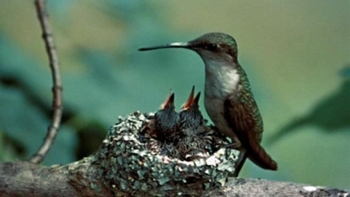 Nature's Half Acre is a 1951 short film (33 minutes) directed by James Algar.

It is an installment in Disney's True-Life Adventures series of nature documentaries. The concept of this particular short film involves the sort of smaller wildlife that one might see in any half-acre of ground. Much of the film focuses on insects: spiders, bees, dauber wasps, caterpillars and butterflies. The film also touches on birds that eat the insects (like a chickadee who won't eat it's mother's offering of food, and a cowbird that lays eggs in other nests) as well as insectivore reptiles such as frogs and chameleons.