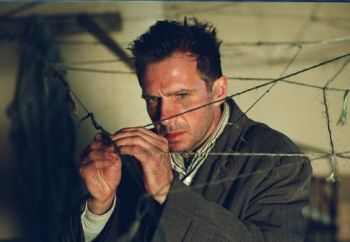 "What have you done?"
"Mr. Cleg... How many shirts are you wearing? One, two, three... Four! Now really, is this absolutely necessary?"
"Oh indeed it is, Madam. Clothes maketh the man; and the less there is of the man, the more the need for the clothes."
Advertisement:

Spider is a 2002 psychological thriller from David Cronenberg starring Ralph Fiennes, Gabriel Byrne and Miranda Richardson, based on a book/screenplay by Patrick McGrath.

It tells the story of a paranoid schizophrenic, the titular Spider (real name Dennis Cleg), who is released from a mental asylum into a halfway house in London. Here he relives his traumatic 1960s childhood as he tries to piece his life back together and come to terms with his madness.