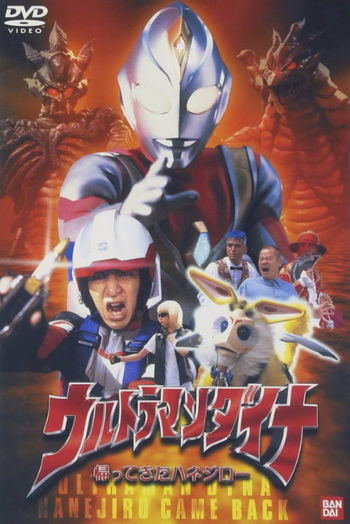 Ultraman Dyna: The Return Of Hanejiro is the 2001 Direct to Video Spin-Off of Ultraman Dyna, serving as a Interquel to the series.

Set somewhere during the final arc of the series, Super GUTS managed to track down the bumbling Alien Mijir trio, which twice attempted to conquer Earth, but are now fugitives on the run. However, the arrest is interrupted by the attack of a kaiju, Arwon, and a mysterious woman which seems to be connected with said kaiju. And true to the title, Hanejiro, the friendly, benevolent alien critter from the series made yet another comeback, but ends up in possession of the Mijirs instead of its friends at Super GUTS. Carrying an ominous message, Super GUTS discovers the true villains behind the kaiju invasion and with Hanejiro's help, attempts to stop it.

Relevant tropes to characters in the special are on the series' main characters pages as usual.

Ultraman Dyna: The Return Of Hanejiro provides the following tropes.