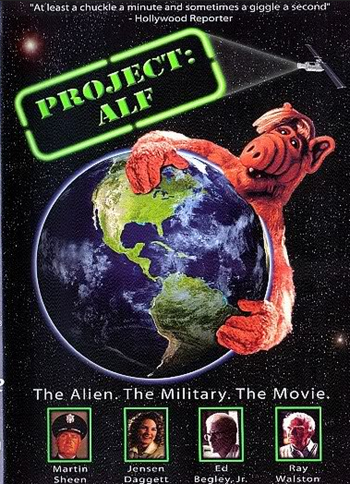 The 1996 Made-for-TV Movie of ALF, following up from that series' cliffhanger ending. ALF is taken to a secret research facility, being looked after, experimented on, even tortured by a litany of scientists, though cared for by a few, in particular Major Melissa Hill and Captain Rick Mullican. They, though having the most sympathy for the diminutive alien, still are quite annoyed by him, but not so annoyed they don't take him to one of Melissa's friends, the wealthy ex-NASA pilot Dexter Moyers. What he has in store for ALF, though...
Advertisement:

Most definitely Darker and Edgier than its parent series in some parts, the attendant wacky humor often making the transition to Black Comedy with jarring effect.

Stars Martin Sheen as a xenophobic General Ripper type with a Freudian Excuse who wishes to see ALF dead.