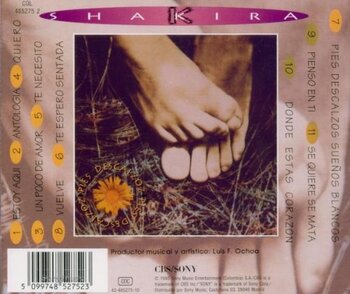 "Pies Descalzos, Sueños Blancos" is a 1996 single by Shakira from her 1995 album Pies descalzos. Ironically, it was not the first single from the album, and was actually one of the worse performing singles from it — though not unsuccessful at all. Because of the song's lengthy title, it is often just called "Pies Descalzos", which can lead to confusion with the album, and the foreign versions are often only a translation of this first part.

The English translation of the name would be "Bare Feet, White Dreams". This is referring to being wholly natural and innocent, which leads right into the meaning of the song. Meaning? It's just a Word Salad Lyrics Latin Rock hit? Jajajaja. It's social satire; very strong social satire, at that, despite being mostly lost on Shakira's new anglophone fanbase. The interpretations range from taking a hit at unnatural human laws and conventions in general, to specifically women and women in more conservative places, all the way to a very narrow focus on overloading teenagers with archaic customs and expectations instead of letting them live their own lives on the brink of adulthood. But, no matter how you read it, the song is definitely saying that invented rules are bad.

And it's not just the song lyrics. The music video, is exaggerating the images of the song to mock them even more. Eve portrayed as Gluttony? Check. Literal "dust to dust"? Check. Frightening masquerade ball-cum-quinceañera? Check. Did The Killers borrow ideas from it? Possibly.

Basically, Shakira is a badass, and while not wearing shoes.