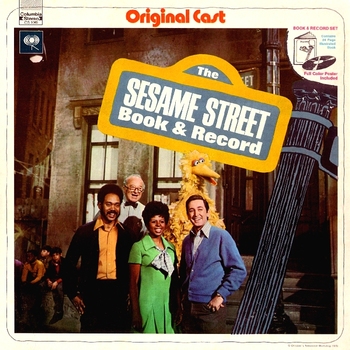 The Sesame Street Book and Record was the first Sesame Street spinoff album, released on Columbia Records in 1970, shortly after the show's first season ended.

Instead of only a collection of songs, it's formatted as an audio Sesame Street episode, linking the songs with dialogue. As the title implies, it was initially packaged with an accompanying book that included illustrations and song lyrics.

Featuring several of the show's most iconic songs, the album was hugely popular, spending nine weeks in the Top 40 of Billboard's album chart, peaking at #23. "Rubber Duckie" was a hit single as well, getting all the way up to #16. It also won a Grammy Award for best children's album.

"On my way to where the Tropes are sweet":