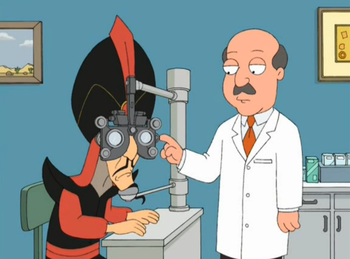 The pivotal scene of the movie.
"Um... about the same. Number one might be a tiny bit better."
—Jafar to the Ophthalmologist

Aladdin IV: Jafar May Need Glasses is a 2007 Direct-to-Video animated film produced by Disney, directed by Seth MacFarlane at his company Fuzzy Door Productions and animated by an uncredited Korean studio. It is the third sequel in the highly successful Aladdin film series, and the second to last direct-to-video sequel made to a Disney Animated Canon film.

The film is ostensibly a prequel to the first three Aladdin films, hence why Jafar is alive after being killed off for good at the end of The Return of Jafar. Despite this, there are no direct ties to the first three Aladdin films plotwise, making the film come off as more of a Spin-Off—the only things connecting them together are the setting and Jafar himself. At any rate, the plot is centered on the sorcerer Jafar—long before he set off on his quest to steal the Magic Lamp from the Cave of Wonders and planned to usurp the throne from the Sultan, Jafar began experiencing problems with his usually perfect 20/20 vision. Fearing that the risk of failing eyesight would eventually ruin his life (or possibly his future plans), he uses a spellbook in his lair that allows him to time travel into the far flung future of 2007note per Word of God, later retconned into accidentally being flung into another dimension instead to visit an eye clinic, where he gets an appointment to see if he will need glasses.

No, really, thats the whole plot.

During the mid to late 2000s, Disney, trying hard to stay relevant by trailing the trend of cynical, pop culture heavy animation made famous by Dreamworks with films like Shrek, along with the 20th Century Fox TV show Family Guy, quickly commissioned this prequel, promoting it as Disney showing they could be versatile in any form of animation and not just be a company that made lavish, kid friendly fairy tales (even if some of them had already been fairly cynical), but in truth it was really to capitalize on other studios' successes while milking the highly successful Aladdin gravy train in turn. As a result, the film's tone is drastically different from the previous Aladdin films, which already stand out in the Disney Animated Canon for their more comedic tone. This one has barely any magic or fantasy in it at all, and the animation is on par with a very low budget TV cartoon. Because Disney had shut down their in-house hand-drawn animation department in 2004, and Disneytoon Studios, their sub studio which typically handled the direct-to-video sequels, was tied up with other projects, Disney was forced to outsource production to a smaller studio. They had previously approached several different outside studios and directors to make the film, all of them turning the offer down, but they ultimately landed the project at Seth MacFarlane's Fuzzy Door Productions studio, ironically the studio that makes Family Guy for rival company 20th Century Fox. Regardless of its clear ulterior motive, Seth was intrigued at the idea of Disney offering him the chance to make a film that subverted their own image and immediately took up their offer to make the film. The project was immediately greenlit, and Fuzzy Door Productions was then saddled with a meager budget of 300,000$ (roughly the budget of a typical half hour episode of a TV cartoon) and six months to complete the film, all so Disney could have the film out in time for a lucrative Christmas season release. Ironically, Disney would slowly begin rebuilding their in-house hand-drawn animation department to make The Princess and the Frog just around the time the film began production.

The making of the film was very turbulent thanks to its low budget, insanely tight deadline and poor treatment of the artists on board. The animators had to crank out the entire story in a week, and were given one month to storyboard and layout the entire one hour movie. A significant amount of content was scrapped due to budget and time constraints, among other issues—a cameo of Aladdin in the opening and ending was considered but cut, and an attempt to get Robin Williams to reprise his role as Genie (who would've provided the films narration) ended with an abrupt phone hang-up after he was pitched the film—an attempt was then made to get Dan Castellaneta to fill in for Williams, but scheduling conflicts with his work on The Simpsons also shot this down, so Genie was scrapped altogether. Several animators were working 14 hours a day with no vacation time or paid overtime to finish the film, and they were allowed no communication with each other at all during production. Some of them were actually sent to the hospital, wrecked from overwork, and they received no compensation for this beyond their regular salary. The animation was outsourced to an uncredited Korean studio, and they did such a sloppy job that they had to do retakes of whole scenes of the film just a month before the film was finished, and even then some errors still slipped in, such as Jafar's tiny body during the eye exam scene. The film nearly missed the deadline and almost went overbudget because of these issues. And the budget was so low, they couldn't even afford to hire Jafar's original voice actor, Jonathan Freeman, like they had planned—Seth Macfarlane subbed in for him by promising Disney to play the role for free just so the film wouldn't miss the deadline (and also because he was amused at the idea of voicing a Disney villain). For better or worse, the film was finished on time and quickly went to the pressing machine, with Disney printing millions of copies in anticipation of the film being a success. With a promotional campaign backing it, the movie made it to store shelves on December 13, 2007.

On release, Jafar May Need Glasses was immediately and universally panned by critics as one of the worst animated films ever released under the Disney name and the absolute nadir of Disney's already infamous direct-to-video sequels due to its very cheap animation and downright asinine premise, as well as being a blatant defilement of one of Disney's most popular movies and their esteemed brand image for going against everything they stood for in the past. As The Black Cauldron did to Disney in the 80's, Jafar May Need Glasses, alongside the tepidly-received Chicken Little (a previous attempt by Disney to ride the Dreamworks bandwagon), summed up everything that was wrong with the management and direction of the Disney studio in the mid-2000s. John Lasseter, who had recently become chief creative officer of Disney's animation studio, was furious that Disney, once the paragon of quality animation, would allow a film that was such a brazen cash grab (even by the standards of the low-budget sequels) to even enter production, much less see a full release, and made a point to ban production of any more direct-to-video Disney sequels after its release (with the exception of the Disney Fairies spinoff films and the last direct-to-video film that was in the pipeline, The Little Mermaid III: Ariel's Beginning. On top of that, Lasseter ordered all advertising for the film to be pulled, in spite of Disney counting on it being a big holiday season moneymaker. As a result, the DVD sold very poorly, and Disney was forced to transport millions of unsold inventory to a landfill in New Mexico, where they were smashed under a bulldozer and buried. Fuzzy Door Productions, for better or worse, got out financially unscathed due to coasting on the success of Family Guy and Disney being the ones who funded the project in the first place, and thus being the ones who had to write off their losses.

To date, copies of the film are exceedingly rare—only a 38-second clip of the film has made its way onto the internet (which can be seen here

), and Disney snatches up any copies that make their way onto Ebay and Amazon, which tend to sell for thousands of dollars, and Disney is quick to remove any attempt to upload the full movie online. Disney is also rumored to have destroyed all production materials for the film and even went as far as destroying the original camera negatives, meaning the film will never again see the light of day. To date, the Walt Disney company has refused to discuss or even acknowledge the existence of the film. It is rumored that Seth Macfarlane is one of the very few people who owns a copy of the film, but he refuses to release the whole film due to Disney threatening legal action against him if he did. A few people have claimed to have seen Seth's personal copy of the film, but Disney bribed them to keep any details they know about the movie secret.

Curiously, a fourth sequel was already in the works by Fuzzy Door Productions by the time this film was finished, Aladdin V: Jafar Answers The Census. Disney was apparently so confident that Jafar May Need Glasses would be a huge moneymaker, that they immediately commissioned it before Glasses even ended production, which increased the already unbearable workload for the staff. Little is known about the film, but it was intended as a made-for-TV movie for the Disney Channel, and the basic plot of the movie would've been about Jafar answering the census at the Sultan's palace. Like with this film, it was intended as a prequel, but it was at least planned to star Iago in a supporting role. For better or worse, it had barely begun production before John Lasseter enforced the sequel ban. Only 37 seconds of animation were completed before the project was abruptly cancelled, and this footage was eventually leaked onto the internet in 2011. That animation can also be seen here.

It is rumored that Seth MacFarlane still owns the workprint of the film, but he likewise refuses to share any of it online due to legal issues.

For extra irony, it bears noting that Disney bought the rights to the show it was ripping off of, Family Guy, from 20th Century Fox on Dec. 14th, 2017, a full decade after this film's release.

Compare to Disney's Anne Frank, a similarly infamous animated movie that Disney has gone out of their way to bury.

note In case you're wondering, no, neither sequel was actually made. Jafar May Need Glasses was a one-off Cutaway Gag done for the Family Guy episode "Lois Kills Stewie". Jafar Answers the Census was mentioned in the episode "Foreign Affairs" as a Call-Back to it. The whole joke of both of them is that they're a parody of Disney's infamous direct to video sequels of the 90's and 2000s. Heck, the whole premise of both skits is that both movies are entirely pointless sequels.

"Yeah. They're pretty much... Can I see five one more time?"