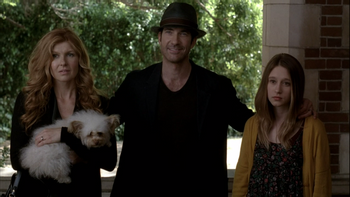 The Harmon family move from Boston to Los Angeles to escape their troubled past and make their home in a house with its own past that is far more troubled.

1978 - Two red-headed twin boys, Bryan and Troy, are looking to vandalise a house with baseball bats. Before entering, they encounter a girl with Downs Syndrome named Addy. She warns them not to go into the house else they will die. The boys brush off her warnings and proceed in. Upon entering the basement of the house, they find specimen jars littering the room; some filled with animal remains and human fetuses. Complaining of the smell, Bryan starts back up the stairs until he realises Troy has gone silent. He walks back down and finds Troy gasping for air, his throat slit by the monster living there.

2010 - Vivien Harmon is undergoing an examination by her doctor. He is encouraging her to take hormones to increase her sex drive. She refuses, saying she must be depressed. He asks her what she's afraid of and it becomes apparent that she recently gave birth to a stillborn baby. Vivien returns home and is alarmed by noises coming from upstairs. Believing there to be an intruder, she dials 911 and arms herself. Upon heading upstairs, Vivien discovers her husband, Ben is having an affair with one of his students, Hayden.

2011 - The Harmon family (Vivien, Ben, their teenage daughter Violet and dog, Hallie) are driving towards Los Angeles. They arrive at the same house shown in 1978. While the realtor goes through the house's history, the dog begins barking uncontrollably at the basement door. Vivien instructs Violet to see to the dog. Curiousity leads Violet down into the basement. The realtor discloses that the previous owners of the house, a gay couple who restored the house to its original state, had died during a murder/suicide in the basement. Upon hearing this, Violet says, 'We'll take it.'The Harmons unpack and move in but it's apparent that Ben and Vivien are still undergoing marital problems. Violet is also regularly harassed by classmates at school, led by popular girl, Leah.Vivien receives an unexpected visit by her intrusive neighbour, Addy and her mother, Constance. Constance gives Vivien a house-warming gift of sage. As Vivien burns it, she makes her way to the attic. She finds an old bondage suit hanging from the ceiling and asks Ben to get rid of it.

Ben begins counselling sessions with Tate Langdon, a young man who has vivid fantasies of killing his classmates. Oddly, in his fantasies he kills the people he likes. Tate begins a friendship with Violet.

Ben begins sleepwalking nude and hears voices. He lights the fire downstairs and is discovered by Vivien.

Vivien is hanging laundry in the garden and is approached by Moira, an older woman in traditional maid's attire. Her intimate knowledge of the house leads Vivien to hire Moira as a housekeeper. Moira tells Vivien that she was the housekeeper for the previous owners and was the person who found their bodies. Ben meets Moira in the kitchen but sees her as a seductive young woman in a sexier maid's outfit.

Ben expresses concern about Tate but is confident he can be treated. Unknown to Ben, Violet and Tate have grown a stronger bond and is furious to discover him in Violet's bedroom.

Vivien is unloading groceries in the kitchen when she's startled by the cupboards and fridge opening by themselves. She hears Addy giggling from another room. The twin boys (unknown to Vivien) appear behind her. Vivien asks Addy to stop entering the house uninvited. Addy continues to ask if she can pet the dog. Vivien firmly but gently holds Addy's face and tells her to not come back into the house. At this point, Constance enters. Addy says she won't come in again and goes to pet the dog who goes to bite at her. Constance warns Vivien never to touch Addy again or she'll hurt her.

Ben tries to report Tate as he believes he's a risk to himself and others. He's unsuccessful as he does not have the correct information on Tate's background. Ben is distracted by Moira, who tries to seduce him whilst he protests. They are discovered by Violet (who like everyone else sees Moira as the older woman).

Violet is once again harassed at school by Leah. Tate and Violet plan to scare Leah as revenge. Violet lures Leah to the basement of the house with the promise of drugs. Tate is waiting there and attacks Leah. He appears to her as the monster seen in 1978, known as the Infantata. Leah runs away, traumatised and with her face sporting deep cuts. Violet angrily tells Tate that he took the prank too far and orders him to leave.

While restoring the music room, Ben attempts to seduce Vivien. They end up arguing over her inability to forgive him for cheating. They reconcile through sex for the first time in a year. Later in the night, Vivien is getting ready for bed. A figure dressed in the rubber fetish suit from the attic stands in the doorway. She believes it to be Ben, who unknown to her is sleepwalking downstairs. Vivien and the suited man have sex whilst Ben is saved by Constance from burning himself on the stove.

Ben is followed by the burnt man whilst on his morning jog. He introduces himself as Larry Harvey, another previous owner of the house. Larry claims to be on release from prison due to inoperable brain cancer. He was incarcerated after killing his family in a fire. The burns cover 70% of his own body and he is compelled by the same voices Ben is hearing. Ben threatens to commit Larry if he doesn't leave him and his family alone.

Vivien returns home with the news that she is pregnant. Ben is overjoyed by the news.