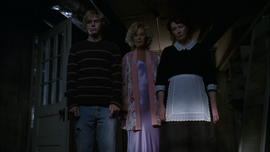 Vivien and Violet find themselves in a dangerous situation. Ben goes back to Boston to fix a mistake.

1968 - Three young women are leaving for a concert by The Doors, teasing their room-mates, Maria and Gladys who aren't going. Shortly after they leave, a man appears at the door, screaming for help. Maria allows him in. She tries to clean his head wound and discovers there isn't one. The man strikes Maria with a nearby bowl, knocking her unconscious. He then drags Gladys upstairs whilst chanting 'Fatty Patty.'Maria wakes up to water dripping on her forehead. The man demands she puts on a nurse uniform. Maria begs for her life, telling him that she's a virgin. He ties her up and as she prays for help, he stabs her repeatedly in the back.

2011 - During a session with Ben, Tate begins revealing his sexual fantasies involving Violet. Ben's cell phone begins ringing. He grows irate as the caller continues ringing. After answering, the woman on the other end simply says, 'I'm pregnant.'

At a skate park, Violet meets up with Leah. Leah explains that she hasn't told anyone else what she saw in the basement. As a result of the prank, Leah's hair as started to turn white from fear.

Later that night, Tate begins watching Violet sleep. The burglar alarm goes off, waking up Ben and Vivien. Ben rushes downstairs and finds Addy giggling in the basement, kneeling on the floor. Ben ushers her out the house through another door in the basement. He fails to notice the red ball roll across the floor from Addy's unseen playmate.

In the morning, Vivien complains that something feels wrong with the baby. Ben tells her she's being paranoid especially considering her last pregnancy.

Ben meets a new client named Bianca. Bianca tells Ben of her dreams of being bisected by a malfunctinoning elevator and informs him of his home being included on the 'Eternal Darkness Tour'. After the session, Ben tries to contact Tate's mother to tell her that he cannot continue treatment due to his interference with Violet. Bianca returns unexpectedly.

In the neighbouring house, Constance is baking cupcakes as Addy reads a magazine. Addy questions why she doesn't look like the women in the pictures. Constance has Addy spit in the cake mix as she pours in ipecac syrup. She explains the effects of upset stomachs and internal bleeding as she does so.

Ben is out jogging, crying over his affair with his student. The woman on the phone is revealed to be the same person, Hayden. He encounters Larry who advises him to lie about his upcoming trip to visit Hayden.

Constance brings over the toxic cupcakes as a 'peace offering' to Violet. Constance guesses that Vivien's pregnant who then asks advice on the pregnancy. Constance reveals that she'd had four children herself (one being Addy). Three of them were born with defects. The remaining son was 'physical perfection' but she explains that she 'lost him to other things.' Constance insists that Vivien's baby is fine. She also tells her that Moira once worked for her too.

Vivien presents one of the cupcakes to Violet who says she's not in the mood. Vivien offers to have a 'girls night' but Violet declines. She tells her that she knows she's pregnant and that having another baby won't save her marriage. Vivien leaves, hurt by Violet's comments whilst Violet shouts that she's weak.

Ben visits Hayden in Boston. Hayden tells him that she's over their relationship and just wanted his support as she gets an abortion the next day.

Back at the house, a redheaded woman named Fiona is at the door. Vivien sees through the peephole that the woman's head is bloody, similar to the man from the 1968 flashback. Fiona demands her help but Vivien remains suspicious. She goes to ring the police but her phone is gone. The banging on the door stops and Fiona has disappeared. Behind Vivien is an intruder she does not see. Violet comes out to see what's happening and Vivien tells her to lock herself in her room and dial 911. An intruder enters Violet's room as she tries to find her phone. Vivien threatens the now masked woman at the door as a third masked intruder comes up behind her.

The now captive Vivien and Violet sit in front of the three intruders. They unmask, one of them revealed to be Ben's client, Bianca. They intend to re-enact the 1968 murders of Gladys and Maria and have bought the same bowl that the killer used. Violet is to play the role of Gladys who was drowned in the bathtub upstairs. She briefly escapes and runs into Tate. He tells her to lure the intruders to the basement where they'll be dealt with.

In the music room, Vivien trades barbs with the male intruder. She sees Addy behind him and subtly tells her to get help.

Upstairs in the bathroom, Violet is forced to dress in the nurse's uniform by Fiona. Bianca comes in eating the toxic cupcake. She feels the effects straight away and leaves to find a toilet. Violet waylays Fiona's plans by telling her the bathtub was moved to the basement in the remodel.

Constance is at home, messing around with a younger shirtless man. As they dance, Addy knocks at the door. Annoyed, Constance answers to Addy insisting there is a 'bad man' next door. Constance takes this to mean Ben. Addy grows agitated, annoying Constance who locks her in a closet full of mirrors.

Bianca vomits in Violet's bin, calling for Fiona's help. Tate appears in the bathroom, luring her in. He then appears in the doorway, holding an axe. He strikes Bianca in the stomach and leaves her to trail upstairs, coating walls in blood.

The male intruder cuts Vivien free, intending her to dress up. She wrestles with him until she bludgeons him with the bowl. She races upstairs, finding the trail of blood left by Bianca.

Violet leads Fiona down to the basement, hiding when the lights flicker. Tate appears and beckons Fiona to the bathtub he's filled for her. She comes closer where he and ghost Gladys wait for her.

Vivien and Violet manage to escape the house and catch Constance's attention.A ghostly Maria leads the male intruder into the basement where he finds Fiona with her throat slit by the filled bathtub.

At the clinic, Hayden is sad when Ben can't go in when she has the procedure done. As he waits outside, his phone vibrates. It shows that he has 13 missed calls.

Constance arrives in the basement to join Tate and Moira as they stand over the bodies of Fiona and the male intruder. Tate doesn't claim responsibility when asked whilst Moira says it was 'them.' They all agree that they must dispose of the bodies if Ben is to continue treating Tate.

The police question Ben and Vivien, a few days later. Ben claims he was seeing a patient (in reality being in Boston with Hayden). Ben reads the case file on Bianca who was using the sessions with him to case the house. The police had located her practically cut in half six blocks away. The other two attackers are still missing, causing the police to think they pulled a 'Black Dahila' on Bianca. After the police leave, Ben asks how Tate helped Violet that night. Violet angrily responds that she's happy Tate was there when Ben was not. She then goes on to tell Vivien that she was very brave. Ben points out that he's home now but Vivien says he's not. She plans on selling the house.—