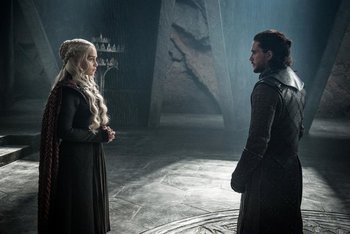 At Dragonstone, Jon and Ser Davos make landfall. There to greet them is Tyrion, Missandei and several Dothraki. Tyrion and Jon greet each other warmly before Tyrion and Missandei welcome them all and escort them up to the castle proper. Tyrion and Jon trade some banter about having not seen each other since the show's third episode, noting they both have scars from their journeys but they're both still here. Tyrion asks Jon if Sansa is doing well and Jon confirms she is, but gives Tyrion a look when Tyrion quips, "Does she miss me terribly?" Tyrion assures Jon that the marriage to his sister was a sham, says Sansa was more clever than she let on, and Jon agrees. Jon reveals that his bannermen did not want him coming south and Tyrion responds he would have advised Jon against it as well — after all, every time a Stark comes south, something bad happens to them. Jon replies he's not a Stark. At that exact moment, Drogon flies overhead, almost braining Jon with his claws.

Above, Varys finds Melisandre watching. She has decided that discretion is the better part of valor when it comes to meeting Ser Davos Seaworth (who, you may remember, promised to kill her for her role in the death of Shireen Baratheon). She announces that she's played her part; she brought ice and fire together. However, she tells Varys that she will return at least once more to Westeros, for she is fated to die here — as is he.

In the Great Hall of Dragonstone, Daenerys awaits Jon and Davos on her throne. She is introduced as the "rightful heir to the Iron Throne, rightful Queen of the Andals and the First Men, Protector of the Seven Kingdoms, the Mother of Dragons, Khaleesi of the Great Grass Sea, the Unburnt, the Breaker of Chains." Ser Davos replies, "This is Jon Snow. (Beat) He's King in the North." Dany has come to demand that Jon bend the knee and swear fealty to her, as his ancestor Tohrren Stark did during the Conquest. Jon isn't really having any of it; his real concern is for his people, and Dany doesn't seem interested in fighting the White Walkers — or in believing they exist. Dany's not happy Jon has come to "break faith" with House Targaryen. Jon's not happy the Mad King Aerys burned his grandfather and uncle alive. They briefly reach common ground when Dany offers her sincere apologies for what her father did to Jon’s family on behalf of House Targaryen and asks that she not be judged for her father's sins, which Jon agrees with. However, Dany still insists he bend the knee. Jon refuses and insists they need to help each other because the dead are coming to kill them all, while Dany wants to defeat Cersei. It gets into a pissing contest with Daenerys pointing out all the Awesome Moments she's had (un-extinct-ing dragons, for example) and Ser Davos pointing out all the Awesome Moments Jon has had (coming Back from the Dead — well, maybe we'd better not mention that). The meeting is largely going nowhere, so it's just as well that Varys hustles in with news; Jon and Ser Davos are ensconced in guest chambers while Daenerys learns of her forces' rout at the hands of Euron Crow's Eye.

Somewhere on The Narrow Sea, Theon gets hauled onto the deck of a ship, soaking wet, experiencing hypothermia and shivering uncontrollably. The Greyjoy sailors ask what happened to Yara, and realize she's been captured by Euron. Theon attempts to say he tried to save her, but the sailors know that if he had tried, he'd be dead, and leave him to wallow while they get back to work, sailing for who knows where.

Euron Greyjoy leads a victory parade through the streets of King's Landing, with Yara, Ellaria Sand, and Tyene Sand bound behind him as captives. Cersei welcomes him warmly, promising that he will get the reward he desires (i.e. her)... once the war is over. Euron takes this opportunity to ask some questions of Jaime about how best Cersei likes to be fucked.

Cersei has Ellaria and her daughter Tyene locked up in the dungeon. She goes to talk with Ellaria, venting her anger and grief over losing her daughter Myrcella, asking a gagged Ellaria why she killed her. She goes down a list of things she could do to Ellaria... but ultimately decides to kiss Tyene. Cersei is wearing the same poisoned lipstick, the "long farewell," that Ellaria used on Myrcella. Ellaria's fate will be to watch Tyene die, and thereafter to stare at her corpse for as long as she (Ellaria) remains alive. Cersei leaves, and the two women, gagged and chained to opposite walls, strain to reach each other, six inches at most separating them.

We now know something interesting about Cersei: after doing this, she goes straight to Jaime and drags him to bed. The next morning there's a Bedmate Reveal to one of the castle staff, as Cersei has decided that she doesn't need to hide her proclivities anymore (Jaime protests, though halfheartedly). The attendant came to tell Cersei that Tycho Nestoris, a representative of the Iron Bank of Braavos, has come to visit. He wants to inquire after the crown's debts, which are enormous and still growing; additionally, the Iron Bank itself is suffering a bit of a downturn now that the slave trade has been completely abolished by the dragon queen. Cersei points out that the Iron Bank has a habit of backing its debtors' enemies if they believe that this will get them their investment back (in the books, Nestoris was last seen consorting with the person he thought had the best chance of overturning Cersei), and then points out that she (Cersei) happens to be Daenerys' enemy. The two come to an understanding.

Tyrion travels out to a cliffside at Dragonstone to brood on his failure to predict Euron's ambush of the Greyjoy Rebel fleet. Jon is already there, and Tyrion quips that he's already doing a better job. Jon asks if Tyrion believes his tale about the White Walkers, and Tyrion admits he does... but points out that Daenerys has legitimate reasons to play it safe, regardless of whether she believes him. Asking her to drop everything on his word is simply unreasonable. Tyrion then asks if there is anything not unreasonable that Jon can ask for... and, one Answer Cut later, he's suggesting that Daenerys give Jon access to the mountains of dragonglass here on the island. She can use more allies, and in this case can create goodwill with one at the cost of something she does not currently have a use for. Daenerys asks what Ser Davos meant when he mentioned Jon came Back from the Dead, and Tyrion demures, pointing out that it's boring in the North and embellishments are bound to happen.

Daenerys is alone outside when Jon comes to chat with her. She is watching Rhaegal and Viserion, and tells Jon that they were named after her brothers. She notes Jon has lost two brothers himself. Dany agrees to let Jon have all the dragonglass he wants. She does not admit whether she believes him.

At Winterfell, Sansa oversees rationing for the winter. At normal provisioning levels, Winterfell has enough food stores for a year at most (which the winter will almost certainly be longer than); if it's the center of a protracted military campaign (and it will be, given the Lannisters to the south, the Greyjoys to the west and the White Walkers coming out of the north), less. The planning is interrupted by the arrival of Bran Stark, brought by a (lineless) Meera. When Sansa sees Bran, she runs and hugs him but Bran is a bit preoccupied. In the Godswood, Sansa wishes Jon were with them and Bran agrees, adding that he needs to speak with him. As Bran is the eldest (trueborn) heir of Lord Eddard Stark, Sansa attempts to cede the lordship to him, but Bran declares that he can't be lord of anything; he's the three-eyed raven. Sansa has no idea what this means and does her best to understand. In an attempt to demonstrate what he means, Bran — in a very calm voice — describes Sansa's wedding to Ramsay... and wedding night. Sansa is freaked out by this and leaves him in the godswood, shaken.

In a cell at The Citadel, Archmaester Ebrose is inspecting Jorah Mormont, who has been cured of grayscale! It's a miracle! Or rather, Jorah claims that the rest and treatment provided by the Citadel did wonders overnight. No illicit midnight operations here, oh no. Ebrose clearly isn't buying it, but dismisses Jorah and then asks to see Samwell in his office. There, Sam admits that he went behind Ebrose's back and administered the treatment. Ebrose acknowledges Sam's skills; most maesters don't even try that method because its success rate is so low. As a reward, he does not expel Sam. As a punishment, he orders Sam to copy a bunch of rotting scrolls and books in his office: "Careful of the paper mites. They like flesh as well."

Turning the spotlight back on Dragonstone, Daenerys and the remains of her war council (Varys, Missandei and Tyrion) stand about the Painted Table, discussing their options. Without the combined Greyjoy-Tyrell-Martell task force besieging King's Landing, the Unsullied will have a hell of a time taking Casterly Rock. Tyrion describes (and the footage depicts) the standing garrison his father built, and the defenses he commissioned, and the loss of life when Storming the Castle. Fortunately, it's all an Imagine Spot, as Lord Tywin didn't design everything about Casterly Rock: he left the sewers to Tyrion, who secretly designed a way into Casterly Rock so he could sneak women in without his father knowing. Grey Worm leads a commando team within, opening the gates and letting the Unsullied flood in. In the end, Grey Worm stands over a captured castle... but with Euron's fleet savaging Daenerys' out to sea, and the recognition that the Rock was under-garrisoned. This leads to the question of where the other Lannister armsmen are.

The answer is Highgarden. Jaime leads a host, with Bronn and Lord Randyll Tarly at his back, to take over House Tyrell's ancestral seat. In the solar, Lady Olenna waits for him. She asks if they fought well, and Jaime allows that they did, given how outnumbered they were. She asks Jaime if he plans to keep supporting Cersei until the bitter end, given how destructive she is, and Jaime points out that the smallfolk won't care how peace was achieved, as long as it was. Olenna sadly notes that his love for her will destroy Jaime, and that before the end, he will come to regret facilitating Cersei's rise to power. The Queen of Thorns then inquires after her manner of death. Jaime admits that he had to talk Cersei out of the most vengeful ones, and instead offers her a vial of painless poison. She drinks it, and then admits that she would've picked a different one for Joffrey had she known quite how ghastly it would be. It takes Jaime a moment to realize what she just said, and then he looks at her in disbelief. "Tell Cersei," she asks Jaime. "I want her to know it was me." Jaime leaves in a Tranquil Fury, furious about having unknowingly given his eldest son's killer a merciful death. He leaves Olenna sitting calmly in her chair, waiting for the credits to roll.