This page contains unmarked (and probably late-arrival) spoilers for both BioShock Infinite and the original BioShock. Read at your own risk. 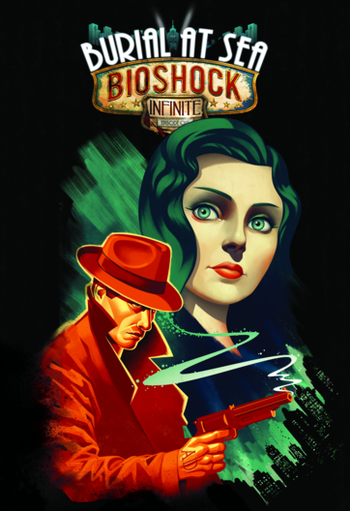 "The girl promised me a way out, and I was desperate enough to believe her."
Advertisement:

Burial at Sea is a two-part add-on adventure for BioShock Infinite, set in the city of Rapture from the original BioShock. Intended to be played after completing Infinite (as it is a combination sequel to Infinite and prequel to the first BioShock), the game begins with protagonist Booker DeWitt as a down-on-his-luck private detective who is hired by a mysterious woman - recognizable as an older Elizabeth, though the two appear not to know each other - to help find a missing girl with a connection to Booker. Episode 2 continues the tale, but with Elizabeth as the player character. Originally available as a download only and released in two "episodes" in 2013 and 2014, in November 2014 a physical CD version of the add-on was released as part of a "Complete Edition" of Infinite.