The group as a whole 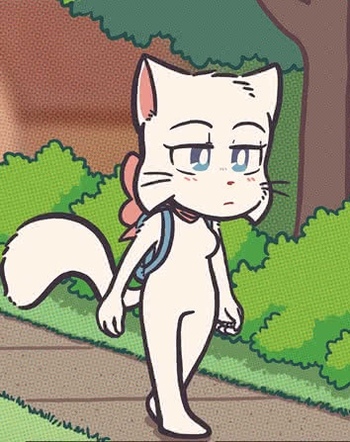 Our female protagonist. Sometimes sweet and sometimes mean, Lucy is wrought with insecurity and would rather punch you in the face than expose it. She has spent most of her childhood lonely, with Mike as her only friend until middle school. This gave her a streak of dependency, which, combined with her violent tendencies, has led to a split between her and Mike. She proceeded to desperately look for solace in Paulo, and later develop suicidal tendencies. 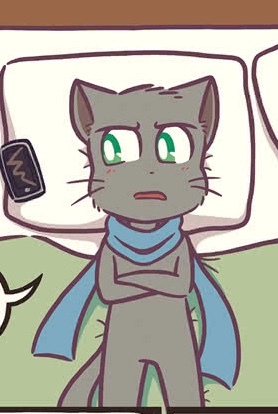 Our male protagonist. A star athlete and regular “nice guy”, Mike often finds that the girls who vie for his attention are the source of most of his problems.

Much of the early days of the comic were spent attempting to deal with his long-distance True Love, Sandy, and his rocky relationship with Lucy and Daisy. This lasted for years, until a love confession by Lucy prompted him to show his True Colors, changing the status quo of the comic forever. 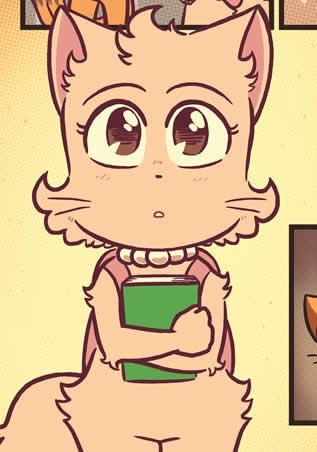 Smart and hardworking, this bubbly cheerleader spends her time immersed in books. She longs to be more than everybody’s “little sister”.

After a long time of playing second fiddle to Lucy, then third fiddle to Sandy, she spent some time exploring her wild side in middle school, culminating into strong-arming Mike into a date with her. It took a long time to realize that her efforts were meaningless, and settled into a steady relationship with Abbey in the summer of sophomore year. 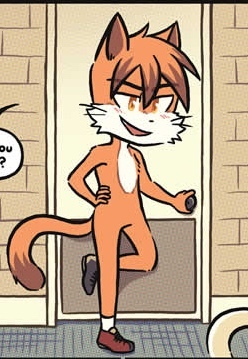 Paulo spends more time hitting on girls than paying attention to class. Despite his talent for timewasting, he is fiercely loyal and will always stand up for his friends. 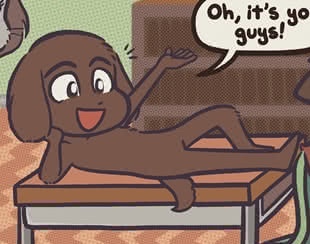 Chipper and dimwitted David sees the world a little differently to those around him. His distance from the others sometimes yields surprisingly astute observations.

He's never had any solid relationship, if not for trying. He's too busy stalking other girls or goofing off to really get one. 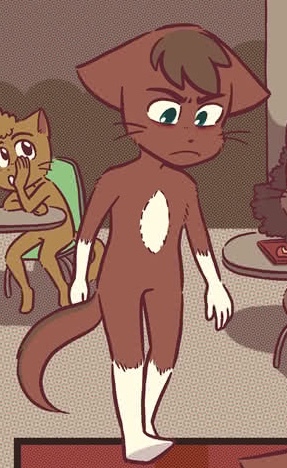 Bound by a strong moral code, Abbey struggles to balance his protective nature with his short temper. While he may butt heads with the more easygoing members of the class, he’s working on it.
Secondary Characters 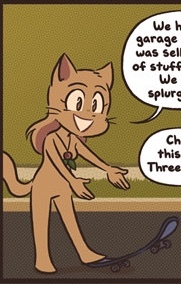 Always busy behind the scenes, Sue's interest in the dramatic doesn't always extend to her social life. She'd much rather be writing or directing. 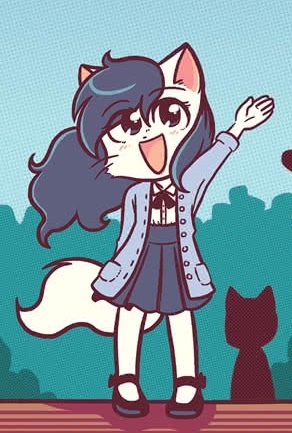 Mike’s very own green light on the horizon, Sandy is Mike’s earliest childhood friend and his current love interest. Having found success as a young model, she struggles with the demands of work, school, and a budding long-distance relationship. 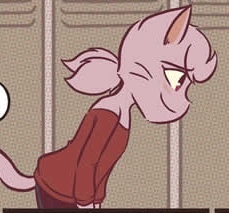 Jessica is a proud, quick-witted member of the cheerleading team who is never afraid to voice her opinion. Together with her closest friend Rachel, she has been quick to offer compassion to Daisy. 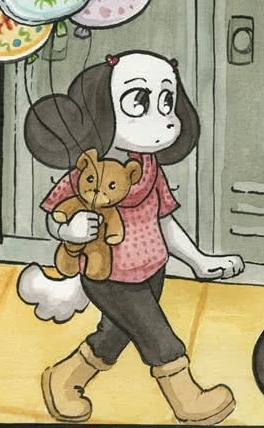 A true flirt, Rachel revels in playful jokes that make light of those around her. While her open nature is often confronting to friends, her cheerful demeanour always shines through. 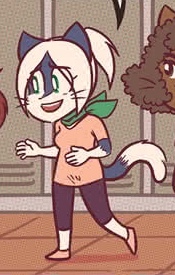 A peppy freshman girl whose life is dominated by school activities. While she’d ordinarily keep to her own group of friends, Jasmine has taken an immediate liking to Paulo, happily adopting the role of his girlfriend and principal partner-in-crime. 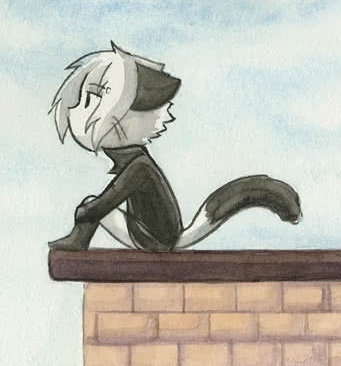 Calm and composed, Augustus is always sure of himself and executes his tasks with quiet efficiency and biting wit. While he keeps his emotions close to his vest, there’s one girl who can unravel everything…

Lucy’s first pet, and the loudest by far. Yashy is something of a prodigy, with a sharp wit that betrays her young age. Bratty, loudmouthed, and rude, deep down she wants nothing more for Mom to settle down with her flea.

Innocent and naive, Chirpy remains in awe of the world around her. She clings to Yashy and always does her best to follow the examples of grown-ups (while making frequent mistakes in the process.)

Lucy’s most mature pet, Lily is a source of wisdom for much of the cast (and babysitter to others.) Patient and understanding, she is usually able to steer her friends in the right direction.

Mike’s pet bird Blur was rescued from a fire as a youngster and has trouble remembering what came before the incident. He counts Yashy as a close friend and can often be seen playing or arguing with her.
Fan Characters

A rich party girl with a rebellious streak, Tess departed the scorched earth of Junior year to find newer, younger friends. She has since struggled to reconcile her upcoming graduation with the close friendships she quickly forged.

Alec "McCain" McCain remains detached at all times, making blunt pronouncements in situations which do not always welcome them. His tone-deaf flavour of cold rationality doesn’t earn him many favors with most of the cast.

Madly in love with David, Kizuna never has any luck getting David to notice her, let alone consider her romantically. Airheaded and clumsy, Kizuna is nevertheless a skilled cook, sadly for David. She appears oblivious to his dimwitted comments.

Carson is a manifestation of his creator’s heartfelt objection to the pervasiveness of the “token” gay stereotype in modern pop culture. (He blindly loves Michael, dresses flamboyantly and borrows his name from “Queer Eye”.) 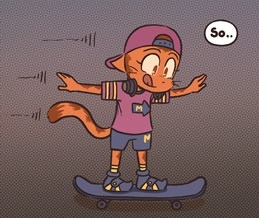 Mild-mannered popcorn merchant Amaya is Sue's best friend. She chooses to remain mute. Her job at the cinema can sometimes be very useful to those who know her!

Precocious Katie spends most of her time worrying about makeup and hair styles and has been duly rewarded by her position as the most popular girl in school. She’s not necessarily mean and cruel… she just doesn’t think too much about others.

Katie’s best friend. Fluent in the written word, Stacy’s peers haven’t (yet) deterred her from a passion for reportage, creative writing, and poetry.

This mysterious girl is absent from just about everything besides David’s fantasies. While she remains unaware, she has completely captured David’s affections, and he spends a lot of his time clumsily stalking her.

Abbey’s little sister seems to have an endless reserve of childish positivity, showing strong dedication to schoolwork and her local Girl Scout troop. She loves her brother dearly, and shoulders more of their shared burden than he’d like.

A hapless kid dragged into various misadventures by other members of the cast, Justin is generally seen looking for cover and wishing he could just go back home.

A true optimist at heart, Matt always tries to make the best out of every situation. His inclination to be kind has made his friends fiercely protective of him.. Also confirmed to be gay and has a crush on Jordan, Lucy's Big Brother.

Madison swears she’s a nice person, but it’s not all that obvious when she’s letting you know about every little thing that annoys her. Jessica, her new girlfriend, finds this adorable. 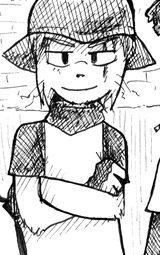 Alejandro's dragon and only true friend.