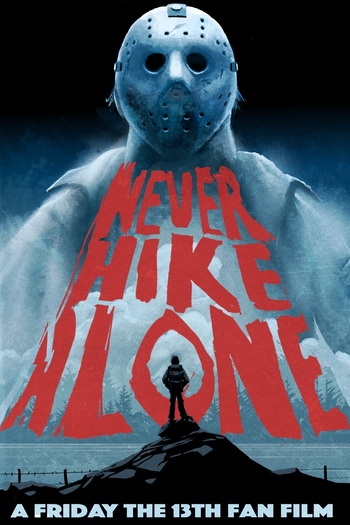 "Camp Crystal Lake... Can't believe it. That story used to scare the shit out of me."
— Kyle
Advertisement:

Never Hike Alone is a Fan Film of Friday the 13th created by Womp Stomp Films. It was released on October 13th (a Friday) 2017 on YouTube.

The fan film is about Kyle McLeod, a hiker who, during a solo backpacking trip, discovers the long lost remains of Camp Crystal Lake. However, as he explores around the area, he soon realizes he's not alone.

It is available to watch for free here

, with a small teaser for a 20 minute prequel, "Never Hike In the Snow", with the possibility of 3 webisodes following suit.

Just one year after the teaser, on October 13th, 2020, Womp Stomp Films released "Never Hike in the Snow" that can be viewed here

This Fan Film contains examples of: