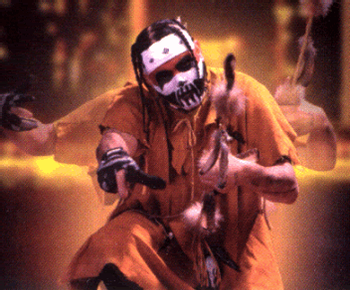 Psychopathic Records artist Anybody Killa combines themes basing heavily in his Native American ancestry with the label's Horrorcore and Gangsta Rap styles, and is possibly the only time you'll ever find a man with a lisp menacing. He once left Psychopathic Records back in 2006 due to him wanting to help his friends with a new record label called Native World Inc., which he still has as of today. However, a year later, he'd return to the Gathering of the Juggalos, and he would end up returning to Psychopathic Records in 2008. He is also a member of Psychopathic Rydas.

Anybody Killa provides examples of these tropes: