Recap / Big Finish Doctor Who 250 The Monsters Of Gokroth 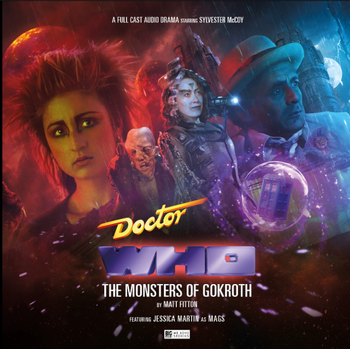 On the planet Gokroth, a village shelters from a prowling menagerie of nightly beasts. As curfew nears, Wilrick, son of village organiser Trella, pleads with new arrival Mags to take shelter, but aim to aid her involuntary bestial tendencies drives her to visit the castle of off-world scientist Dr Maleva. Wilrick then runs into a mysterious traveller, an apparent acquaintance of the girl with the mysterious determination to visit a suspected Mad Scientist. Trella’s distress call is then answered by travelling showman Varon, who offers, for no small fee, to sort out Gokroth’s monster problem. The Doctor makes a counter-offer to do it for free. But not all is as it seems….