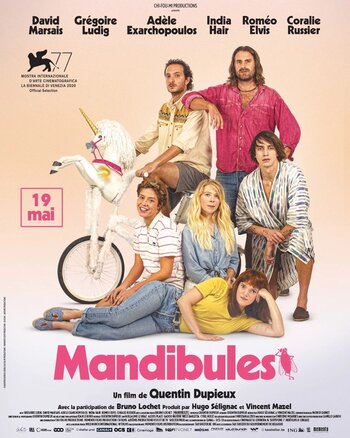 Mandibles (French: Mandibules) is a 2021note (it premiered at Venice Film Festival in 2020 but its release was delayed due do the covid-19 pandemic) French-Belgian comedy directed by Quentin Dupieux.

Manu (Grégoire Ludig) is a simple-minded, homeless man who is offered a shady but profitable job: he has to deliver a package and not ask what is inside. He steals a car and takes his best friend Jean-Gab (David Marsais) with him. On their way they find a giant fly (a puppet animated by Dave Chapman) and decide to tame it in order to "earn" money (they make vague plans about the giant fly stealing for them).

As usual with Dupieux, this film is quite absurd and many things seem to happen for no reason.