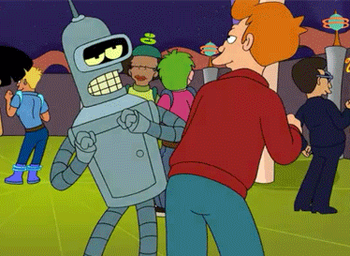 "I don't want people thinking we're robosexuals. So, if anyone asks, you're my debugger."
Farnsworth: Good news, everyone! Zoidberg, Hermes and I were all rummaging through old archive files and came across a bunch of files containing all the Ho Yay that happened while we were in business. Fry, Leela, Bender, I'm sending you to the TV Tropes company to deliver these files.
Leela: Professor, is this really necessary? I don't know why such a company would want ancient dusty files filled with nothing but subtext.
Bender: Oh yeah! My gaydar's flying off the roof right now 'cause of what I just heard.
Advertisement: