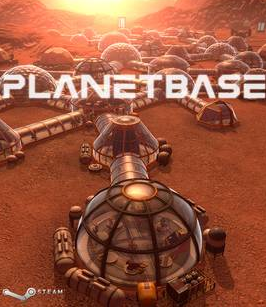 Planetbase is a Space-Management Game from Madruga Works, released for PC in 2014. It was later ported to Xbox One in 2017 and to Playstation 4 in 2018.
Advertisement:

In it, you build bases on several different worlds, from a desert planet to a storm planet. You're given five different types of colonists, each with their own roles in the base:

Your base can also build (or purchase) bots who perform specific duties, taking some of the workload off your colonists so they can focus on jobs only a human can do

With these and the materials you arrive at the planet with, you are tasked with building a base that will sustain itself and all the colonists living in it.