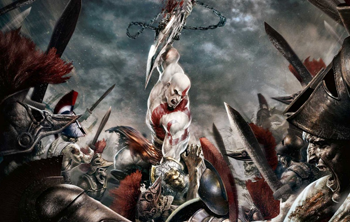 He's killed gods. 'Gods', as in more than one. What makes you think armies will slow him down?
This is practically the rule in video games, as many of them feature one Player Character destroying enemies by the hundreds. For many players, it's the entire point of playing games.
Advertisement:
open/close all folders
A-B
C-D
E-F
G-K
Advertisement:
L-O
P-Z